Scene: Driving down the street L points out a restaurant we have been to, Blueberry Hill.

Not Dad. Straight up scolding in nature. Calling him by his first name, because she means business. Don't mess with this kid. Also, I don't know where she gets it from {looks around, innocently}.

Email ThisBlogThis!Share to TwitterShare to FacebookShare to Pinterest
find it: L-ism, say what??? 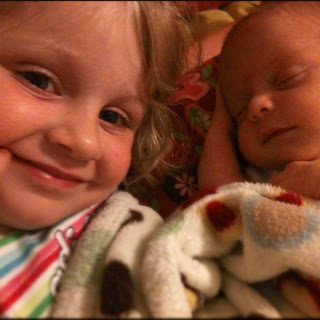 I have so much to say and so little energy to do so.  It's a happy exhaustion (for now). I reserve the right to have a freak out at another time. But now? This picture captures it all.

A new nightly routine of snugging out in our bed.  All my loves.

Email ThisBlogThis!Share to TwitterShare to FacebookShare to Pinterest
find it: the girls

At the hospital, there were religious statues all over.  When we were still waiting to be discharged so L took a walk with Grammy. Sometimes she loves to give you a play by play on all the things she saw or learned. Luckily, today was one of those days.

Give it a minute.
Who might she be talking about?


The BLESSED Mother of course. Who from here on out, we'll be referring to the BLASTED mother.
circa 10:00 AM No comments:

Email ThisBlogThis!Share to TwitterShare to FacebookShare to Pinterest
find it: L-ism, say what???

Oh hello. How do you do? I'm back. We're back. It's great to be back. You might be wondering, "Where the hell have they been?"  Maybe you saw the last post and thought, "Oh well - they are settling into their new routine!"

I'd say a little bit of yes, but mostly a healthy heaping of no, not quite.

Side note & disclaimer: This is one of those moments I wish I hadn't shared my URL with family. Sorry people. But I'm going to stay true to what I want for this space, and just be out with it. Also, for the record - this is not meant in any other way but how I actually mean it: with all due respect, a little bit of raw venting and a scoop of sarcasm & snarky personality. You know, aka, my charm. Layman's terms? Don't take it personal.

Whoever said that having a new baby was tough work, didn't have 3 weeks of family visits back to back. Truth: that was the real adjustment; not the tiny human.

First, it's overwhelming even though no one wants it to be - it just IS. Everyone tries to avoid it, but it's life. We have to figure out meals, things to do, making sure everyone has what they need, turns in the bathroom, where to eat, when to eat, what to eat, just day to day. Add to that our own schedule, hang ups and routines? It's overwhelming.  Everyone is a little different, and having a revolving door of visitors means no down time and just a continued ride through the door. For three weeks we had people arriving, then leaving and later that day arriving.  Exhausting.

Since our move, L has barely gotten back into regular schedule only for it to be thrown up on it's head (again).  Every grandparent believes in different sleep patterns (none of which are in line with ours), nutrition needs (none of which are in line with ours), and discipline expectations (none of which are in line with ours). As a result, home girl was MORE than a wee bit wound at the end of each stay.  The thing is, grandparents aren't supposed to be concerned with these things- it's about the fun - it should be.  It's also usually a day or two, not large blocks of time. Problem with that? After 3 weeks... it's not so much fun for the parents.  L started to take on some habits that might be common for other kids, but not OUR kid.  We're lucky; she's a well behaved kid, makes good decisions and is pretty amazing overall.  Is she perfect? Absolutely not, but regularly misbehaving and talking back? Doesn't happen. After a month of different scheduling? Home girl was acting out, screaming "NO" in our face, stomping around, huffing and puffing, tantruming about dinner or about anything and crying for no reason.  She is a creature of habit and needs structure; without it she's a hott mess.

Second, we (barely) have space for people, but unlike previous homes we do actually have a spare bed and space. I don't know how comfortable it was, but like I said, it is what it is. Where we don't have space? Vehicles. C's car barely has enough room for the immediate family, with the new addition (and car seats). Enter my (poor) car. I have a completely unreasonable car as a mom, and now a mom of two.  (Side note: Shit. I'm a mother of two. When the hell did that happen?) It's what I have and we are going to get a bigger car at some point this year.  It's just been slightly busy lately so you can imagine it hasn't been a priority. With that, we can't go anywhere together (with more than 2 adults and 2 kids), without taking two cars. On the other side of the coin, no one can drive the ball and chain's car, other than me.  If anyone wanted to go anywhere, they had to drive my car. My car, as much as I love it, is older, a convertible and small. It has it's own charm, but it also has things like sensitive steering column and ignition, loud side effects (the convertible top is not electric, so you can hear the wind coming through as you drive), and it turns out it is falling apart.  Every new driver would come home with another report of something going wrong with it.  The glitch? We couldn't do much about it because without the car, the next leg of visitors would be home bound.

Three weeks ago, when I last drove the car, there was ONE tail light out. After three weeks of the revolving door of drivers, as I write this I await hearing from our new mechanic whom I have become close with after days of conversations. I'm learning so much about cars.  I might become certified to fix vehicles during my maternity leave.  After three weeks of not driving, I drove my car the other day to the mechanic to get looked at. Now? My reunion with my car included issues such as, but not limited to: back brakes (totally grinding - metal to metal need replacing), tail light replacement, new headlight, turn signals out and not working, parking break replacement, something about an axle, oil dipstick replaced, and finally a broken glove box.  Doesn't that sound like something Hallmark movies are made of?

Finally, while there isn't much a baby does at this point - what she does effects the rest of the house. Some people think, "never wake a sleeping baby." Those people? Do not include our doctor. We need to make sure she is eating regularly and getting on a regular schedule. This includes waking her up every two hours to make sure she's eating. And oh boy, does she like to eat. Two side effects of these facts? Comments & confusion.

With L, I was definitely worse about it. I was covered up more, even in front of the husband. This time around? It's just different. I'm not as freaked out by it, but I certainly am not going to be whipping them out. I still use my cover up - even in the house, with or without family in the house.  That said, having the house full of people and most that are super uncomfortable with it - makes for an even MORE uncomfortable situation. It's like salt on the awkward wound.

At the end of our sentence the month, to say we were ready to spend some time with our new family of four, would be true. To say we raised our fist in the air and may have pumped them with delight saying "Free at last. Free at last. Thank God Almighty, Free.At.Last." May also be true.

Stay tuned though, the roles are always shifting... I hope sooner rather than later!

Email ThisBlogThis!Share to TwitterShare to FacebookShare to Pinterest
find it: mi famiglia, rants and raves, supermom, the sequel
Newer Posts Older Posts Home
Subscribe to: Posts (Atom)
(c) 2007 all rights reserved. aka don't be a D and swipe any content, photos, etc - sucka. Should you be tempted, let me know so I can be flattered and then give me something write about.