Since (almost) last I wrote here, there were just sonogram photos I thought I would share his announcement.

His arrival has been oh so very exciting for oh so many reasons. It's been over 3 months. It feels like we've known him forever and yet I can't believe how fast these months have gone, even when it feels like it's going slow. If that makes any kind of sense.

To follow (our web friendly*) birth announcement. The front side is fairly traditional in terms of what information is provided. 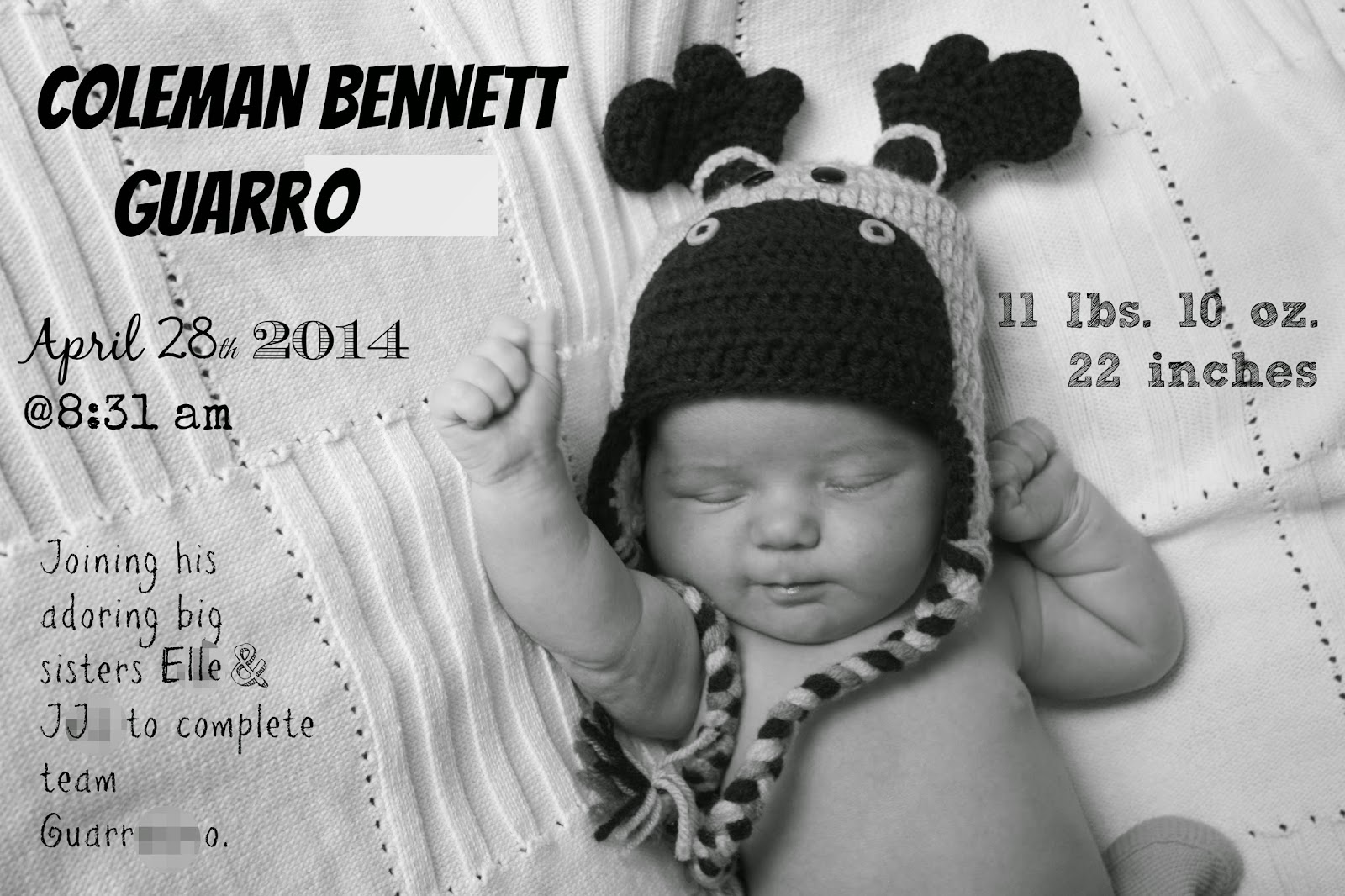 I posted the first picture 4 hours after he was born. I had hoped we would come to a decision before we posted anything, but word on the street (texts) was that it had been leaked. The baby was born, that he was a he & how (very) much he weighed. It does sound of so very Kimye, doesn't it? I mean, sure, I don't take naked selfies and the ball & chain doesn't talk about himself in the third person - but there were people scooping us on our own son's birth before we were ready.  (In hindsight I probably could have used another celebrity couple. Cause now you are thinking, wait? Does she have a sex tape? Does he hate on Taylor Swift? And other terrible things about the couple I chose. But you know what I mean, right? I digress...)

Since it was on an instant message circuit I figured, I'll deal with the stress of not knowing (for sure) the name. I didn't want anyone to hear that he was born and we were still silent. If it were me? My mind would go to something possibly being wrong, and it hadn't.


And when I finally got myself together, a day later:

The moose comment was strictly random. I threw it in: an animal, known for it's size to make fun of a situation that was stressful (you'll see a watered down version of why to follow). And it stuck. And it makes me smile.

The back was a (very necessary) FAQ because holy hell were there questions asked frequently (edited for the world wide web). And because I know this might come up (surprisingly so): 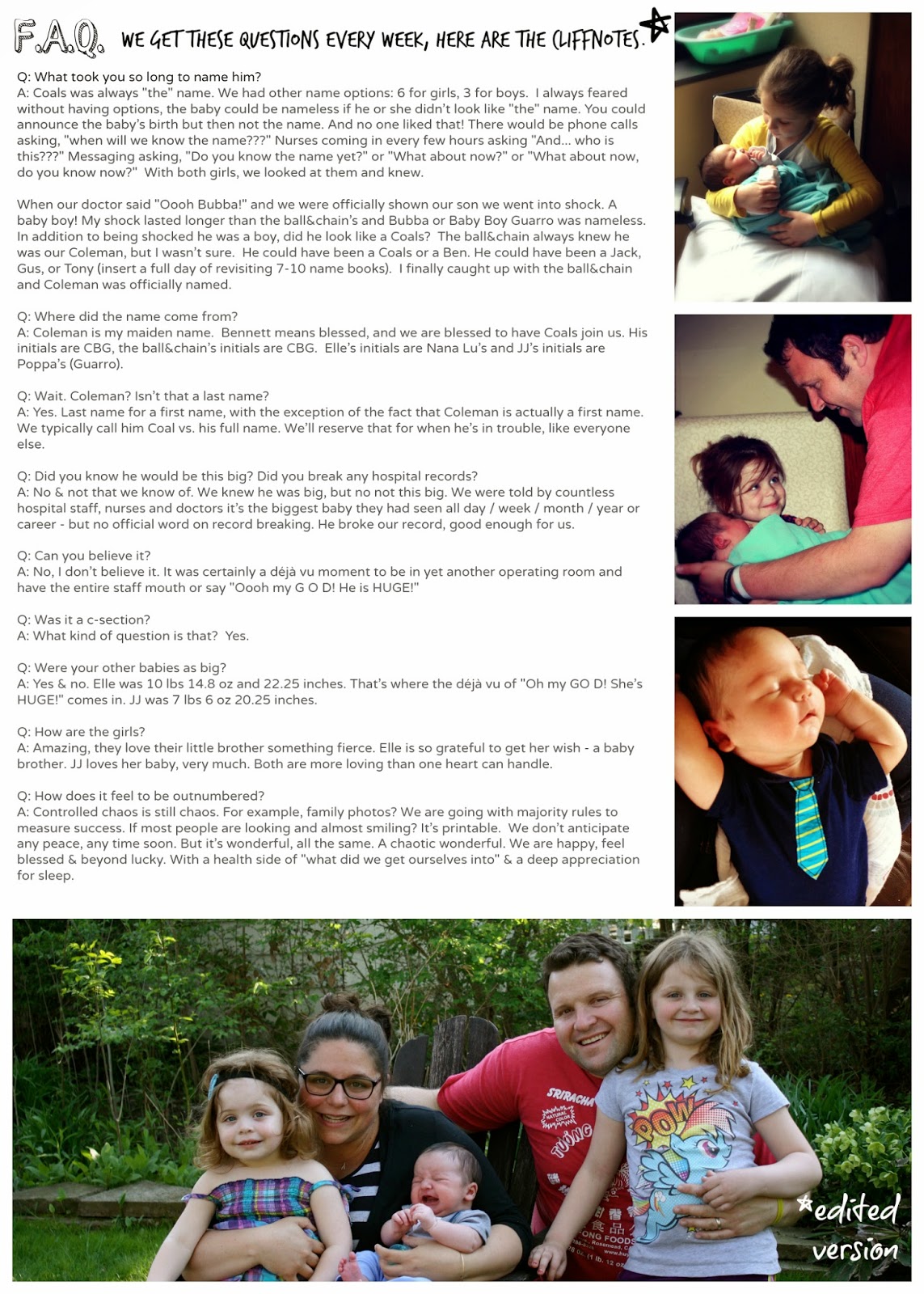 A closer look of the back:

Q: What took you so long to name him?
A: Coals was always "the" name. We had other name options: 6 for girls, 3 for boys.  I always feared without having options, the baby could be nameless if he or she didn't look like "the" name. You could announce the baby's birth but then not the name. And no one liked that! There would be phone calls asking, "when will we know the name???" Nurses coming in every few hours asking "And... who is this???" Messaging asking, "Do you know the name yet?" or "What about now?" or "What about now, do you know now?"  With both girls, we looked at them and knew.

When our doctor said "Oooh Bubba!" and we were officially shown our son we went into shock. A baby boy! My shock lasted longer than the ball&chain's and Bubba or Baby Boy Guarro was nameless. In addition to being shocked he was a boy, did he look like a Coals?  The ball&chain always knew he was our Coleman, but I wasn't sure.  He could have been a Coals or a Ben. He could have been a Jack, Gus, or Tony (insert a full day of revisiting 7-10 name books).  I finally caught up with the ball&chain and Coleman was officially named.

Q: Wait. Coleman? Isn't that a last name?
A: Yes. Last name for a first name, with the exception of the fact that Coleman is actually a first name.  We typically call him Coal vs. his full name. We'll reserve that for when he's in trouble, like everyone else.

Q: Did you know he would be this big? Did you break any hospital records?
A: No & not that we know of. We knew he was big, but no not this big. We were told by countless hospital staff, nurses and doctors it's the biggest baby they had seen all day / week / month / year or career - but no official word on record breaking. He broke our record, good enough for us.

Q: Can you believe it?
A: No, I don't believe it. It was certainly a déjà vu moment to be in yet another operating room and have the entire staff mouth or say "Oooh my G O D! He is HUGE!"

Q: How are the girls?
A: Amazing, they love their little brother something fierce. Elle is so grateful to get her wish - a baby brother. JJ loves her baby, very much. Both are more loving than one heart can handle.

Q: How does it feel to be outnumbered?
A: Controlled chaos is still chaos. For example, family photos? We are going with majority rules to measure success. If most people are looking and almost smiling? It's printable.  We don't anticipate any peace, any time soon. But it's wonderful, all the same. A chaotic wonderful. We are happy, feel blessed & beyond lucky. With a health side of "what did we get ourselves into" & a deep appreciation for sleep.

*I updated some of the details / names / references it isn't the exact image word for word.
**Fine, it wasn't a short story & could have been shorter.
circa 6:25 PM No comments:

Email ThisBlogThis!Share to TwitterShare to FacebookShare to Pinterest
find it: Coal{of}mine, love, mi famiglia
Newer Posts Older Posts Home
Subscribe to: Posts (Atom)
(c) 2007 all rights reserved. aka don't be a D and swipe any content, photos, etc - sucka. Should you be tempted, let me know so I can be flattered and then give me something write about.