I used to travel all the time for my job. Once a month or more. For the last two years, this has steadily become less and less a part of the job. And for this, I am grateful. There are lots of reasons for my gratitude, most prominent of them?

I suck at travel.

Travel sucks for me.

Travel, can suck. It.

It never works out. There is always some crazy ass story that if it didn't happen to me, I wouldn't believe it. Seriously. I have a whole tag on this here blog. And frankly? There is so much that goes unsaid. So much that I don't write about. It happens every time I travel, and most times I leave the house. It's a wonder I do.

What is all of this to say?

You can imagine my excitement, I'm traveling this week.

The good news? I'm grateful we can work something out to make what could be a bad situation a little less painful (literally and figuratively).  We are still at the point that JJ & I away from each other will not work. She's still nursing, and unlike it was with L, it works (well enough). They are different in so many ways, nursing is one in a never ending list of differences. Leaving for the weekend or more, is not an option. I'm grateful that we can make it work. JJ will come with me and we worked out childcare.  We went through all kinds of options, but it turned out the husband was able to take off from work.  He will be joining us with L the day after we arrive.  My brother is in the area, to help out before he gets there and we are set.

If by set you mean, I'm flying solo with JJ, who is a loose cannon.  We will likely be stuck in the bathroom row, in-between two extra large, angry, smelly people and my darling 4 year old and husband have already been bumped up to first class. Seriously, our seating arrangements are not confirmed - but the two in first class? Confirmed.

Another interesting fact? You know that long list of differences between my girls? You know the one I'm really not looking forward to testing? Travel.  The one thing I can say about all my travel BS? My kid was always dreamy. Dreamy in cars, trains, and planes. Seriously. L is a DREAM on flights. She's cute. She's funny. She's silent. A. DREAM.  You know what that means?

We are not all set, people. And if you are flying on Thursday morning and see me falling down the aisle with baby girl in tow? My apologies, pal. My. Apologies.
circa 11:43 PM No comments:

Email ThisBlogThis!Share to TwitterShare to FacebookShare to Pinterest
find it: rants and raves, travel-aster 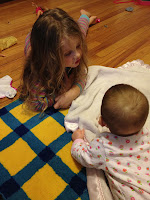 It's about time I write a letter to our girls, together.  As much as I want to cherish this time that you are a baby girl, JJ, there is so much about everyday that I want to speed things up. Don't get me wrong. This baby baby stage is magical. Even if you hate me and won't sleep.  I cannot wait to see the two of you together in the future. Will you ooze love for each other so blatantly as you do now? Will you have your own language, as L thinks you do now? She swears she knows what you are saying, JJ. Does she? I have a hard time believing you two aren't having your own conversations.  I just can't wait to hear what you'll say to each other. Will you have conversations in your room? Will you want to be roommates as much as you do now? All of these questions, I don't have the answer to. Will I keep the monitor in the room longer than I need to, to hear these conversations? You bet your sweet baby asses. On a side note, on the subject of sleep (what?) - I'm waking both your asses up once you start to sleep as teenagers. HARD & FAST. Watch.OUT. 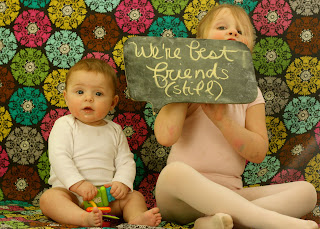 Back to the love at hand...  the two of you together is magic, everyday. It isn't always the best day ever (see lack of sleep, for example), but seeing you two together makes me happy. Everyday.  I've heard of this "sisterhood" thing.  Never having a sister myself, I don't think I ever really got it. I get it now. And maybe all sisters aren't like this, but I can't put into words how blessed I feel that you are sisters like this. You make each other laugh in a way we can't replicate. There is a palpable concern and love for each other I don't know that I've ever seen. L, you are so proud of each new trick JJ learns to do. When JJ does something new I'm most excited to share the news with you.  L, you're the sure fire way to calm JJ down. Likewise, you're also the sure fire way to distract her. I feel like in time you two will scheme and my hope for you is that you stay best friends as L insists you are.  Girls, I only ask that you take it easy on us. You are adorable. You are amazing. You are funny. You are smart. You.Are.Trouble. I can feel it. And I don't want to place bets to early, but my money is on L to play the innocent one and JJ to mastermind mischief. 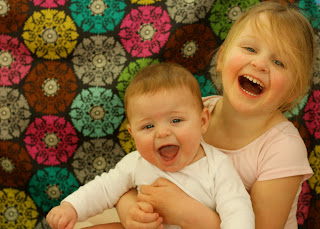 Love you much. Love you always,  Mama & Daddy

Email ThisBlogThis!Share to TwitterShare to FacebookShare to Pinterest
find it: JJ's way, Lbsession

This happened. My little girl.

I called the ball & chain to tell him I was running late, he had picked up L from school and by all calculations he was home. He was not. He was out. Why, you ask? He just picked the kid up from school and "ran an errand." I asked the same thing. Smart, people. And so the story goes...

"Well. After I picked up L, we went to the florist. We picked up flowers for you."
Inner monologue: WHY in the world are you busting the secret?

"So, she carefully picked out each of the flowers. She was really into it. Then she asked if we were picking out flowers for Mary {our au pair}. Of course we did and she was very specific which flowers she wanted for her. She was into it. When we went to pay she turned to me and asked, 'but Daddy, who is going to surprise me with flowers.'"To which, his heart promptly melted.

He had a follow up question and she had more heart melting one liners.

Of course he was out, getting his girl some flowers to surprise her with. This kid? She's too much. And for whoever she ends up with in life? I hope they are ready for her. 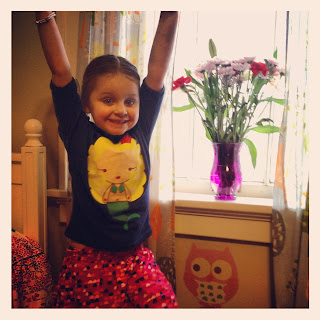 Email ThisBlogThis!Share to TwitterShare to FacebookShare to Pinterest
find it: holiday, L-ism, Lbsession

Put to the Test

I've said from the beginning: I don't care about the color or make.  All I wanted was a third row and low car payments. We rounded out the decisions between a few vehicles and ended up going with a Toyota Highlander. It's glorious, but the road to the glory was interesting.

Long story short, we were going for the lowest monthly payment. My husband & 4 year old did a first round. One afternoon they went out, talked with people, got quotes and test drove vehicles. It wouldn't be a surprise, if you know the kid - she loved the process. Candy at every turn, fancy new rides, riding in a booster seat? You could have told her she was at Disney and she would have believed you. What did I like? They came home with a car payment under what we wanted to pay. I mean, other than free.

Fast forward a few weeks later when we are ready to sign on the dotted line, it turns out the deal he researched was the basic model. It comes with a steering wheel and four wheels and it turns out they don't actually make that car much.

Just as we are about to walk out, they do a search. And they found one. One vehicle that would give us the lowest car payment. Oh, but don't forget about the taxes so it really isn't as inexpensive as you think it's going to be.

"But before we move forward let's take a look at the color..."

He proceeds to talk about the color, calling it maroon. I ask if it's red. He makes a face and says, "Ummm. Let's go take a look at another car in the same color."

We go out to the car lot and start walking toward a car that can only be described as purple. He tries to tell me in some lights you wouldn't be able to tell, to which my only response can be, "Sure, in the dark." As he continues to try to sell me on the Barney mobile I try to explain that he might as well be showing me an orange car. He tries to tell me it's more of a 'wine' color to which I respond, "Sure, purple wine."   There is a back and forth. I make clever wise cracks, he doesn't get me. Rinse & repeat.

At the end of the day, it went a little like this:  "I did say that I didn't care about the color.  This is putting me to the test. You can say whatever you like about this car, in which light it would look like what.  The bottom line is I will always know, in my heart of hearts, that I am driving a purple car."

Not only was it a purple, as if that wasn't bad enough, it had cream white interior.  You would think they would be paying ME to drive that bad boy. You'd think wrong.

I was put to the test.  Guess what the score was?

We didn't get the purple powered truck.

Email ThisBlogThis!Share to TwitterShare to FacebookShare to Pinterest
find it: rando, rants and raves
Newer Posts Older Posts Home
Subscribe to: Posts (Atom)
(c) 2007 all rights reserved. aka don't be a D and swipe any content, photos, etc - sucka. Should you be tempted, let me know so I can be flattered and then give me something write about.