For some strange reason I am misunderstood. My jokes are sometimes left in silence and my humor thought of as sarcasm. Not that done in jest but of the language of el diablo.

For the record: just in case - I do love family time. I do love the fact that we have so much family. I am thankful. I am even thankful for the real El Diablo. Who knew? My baby girl (toddler, fine she is a toddler) has the most loving grandparents, uncles, aunts, cousins, friends, friends of friends - let's be honest she is easy to love - and I'm grateful. And while I do love quiet time, I do love the loud times. I love the laughs, and even the annual arguments and all the mayhem truly does make me smile (in a happy way, not in a sinister way).

The reason I don't want to travel for the holidays is two fold. I really do want our family to start our own traditions and because.

Because who the hell doesn't want Santa to come to their house? Sure I left a gift - so that she would know that fat bastard knows where we live - but whatever. She should know he knows where she lives - though some of our near and dear still don't (read here sarcasm meant in jest not El Diablo speak).

Because we have spent the last few years traveling - complaining all the way. Together but never together. It's crazy maybe I've mentioned why before?

Because I have spent the last 30 years traveling and I don't to. Insert foot down and proceed with tantrum. I don't want L to feel the same kind of pain. I remember making treks only an hour or two to not one but two families in a day - and it was no laughing matter. We're laughing now - but how long will said laughing continue? Do I think she'll suffer the same fate as I? Running to the bathroom to cry suffering through yet another evening of family fun, never to hear the end of it? (story for another time) Probably (hopefully) not. She doesn't have to run to the bathroom crying (story for another time) to feel the sheer tension in the 110.5" space as we travel 456 miles – about 8 hours 9 mins with no traffic (Christmas miracle alert if there is no traffic over the holidays) in the span of just a few days. Packed to the gills with presents for others or for us. Amazing generosity that I appreciate - that we appreciate. Yet selfishly I remember my favorite holiday to date that I want to replicate.

The preparation. The execution. No seriously. Picture it.

That's what I want for us. Gooble Gooble.

And that doesn't mean I don't love people enough. Enjoy it all - in one way or another - it's not about you. It's about a family starting off on the right foot. 'Tis the Season.

2010. Doors are open and hotels are taking reservations.
circa 9:06 PM No comments:

Email ThisBlogThis!Share to TwitterShare to FacebookShare to Pinterest
find it: mi famiglia, traditions

Last year we were a delinquent family. Between C's travel schedule & my work schedule we barely remembered Christmas was upon us. Between all that and technical difficulties when I was camera less for the blessed holidays - no pictures. No holiday cards, promises of Happy MLK Day Cards - with no follow through. We suffered through another holiday season away from home, vowing to never do it again.

And then we did. This year we did get out the holiday card - alas lots of confusion attached since apparently Abelle is a stranger to most. I got many a text, email, phone call or face to face question - "I loved the card, but who is Anabelle?" OR "Congratulations! When did you have another girl?"

It's not that I don't love family time - the loud lulls of screeching. The awkward jokes, the mayhem of crowds. I love all that. Of course, and of course, the undercut or straight out knock outs of insults from the dear elderly. Who wouldn't love all that? That isn't it - it's not the inability to keep L on a regular schedule or who would want to miss out on the constant parenting tips? Not I. The hours in the car, the hours thinking about the hours in the car, the hours it takes to pack, unpack, repack, unpack, pack up, unpack and repack then unpack again. The days of laundry to follow - oh and dog hair for as far as you can see.

Of course I do love the time L gets to spend with her family - getting to know everyone and make new memories. That we do love. The way she lights up when she seems familiar faces and those that she is just starting to remember. We love all that. There does, however, come a time where a family has to make their own traditions and own memories that don't include hours of unnecessary travel to pacify the masses. There comes a time where we need to pacify ourselves. We'll miss the crowds during the holidays, we will miss managed chaos - but with all of the missing I know we'll welcome the chance to make our own traditions. You are all invited. Our house, holidays 2010. Family, friends and strangers - you are more than welcome. I want her to know a holiday in her own home - one that is random, full of laughs, and full of sitting in our pjs, drinking coffee while watching her figure out how the heck that guy got down the fireplace to drop off all her goodies. 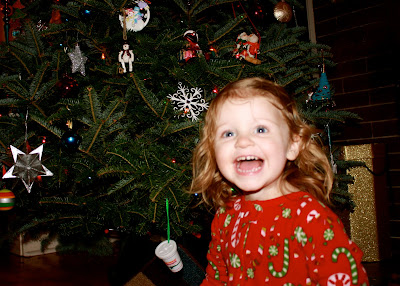 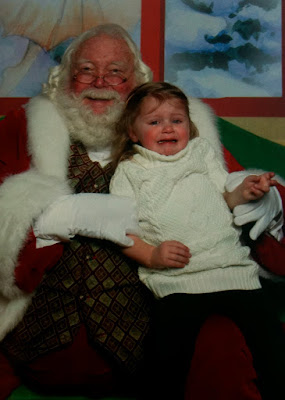 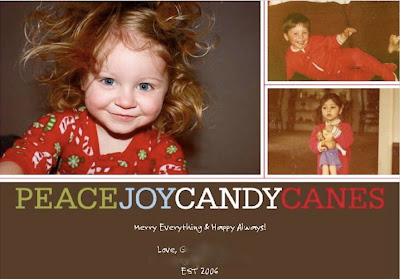 File this Under: When She Gets Older

I'll be sure to hand this over to the David Letterman of her time - when she hits it big - remember when?

Last weekend we went to go cut down our tree. For years our tradition landed us at the local iHop Parking Lot. Making the move to da'country we needed to shift our traditions. Our newest thought was to do as the country folk do and make it happen. Go cut down our own tree. Our BFFs have a tree farm - family owned and run and a fan-freaking-tastic in every way. Well... with the exception of poor planning. L was all suited up but we may or may not have forgotten our own gloves & hats and we may or may not be into manual labor that comes with cutting down your own tree. Overall it was a good experience that we'll do again and may very well be our very own new tradition. Next time we'll make sure to bring gloves and a change of clothes for L. She is not a big fan of getting dirty - so falling down mudslides made for a very cranky child. We'll also probably go with a tree that smells a bit stronger - even though the needles may take our first born, Ababelle.... but if she were to be taken by way of tree needles I'd argue to say it was for a good cause.
circa 10:25 AM No comments:

Email ThisBlogThis!Share to TwitterShare to FacebookShare to Pinterest
find it: traditions 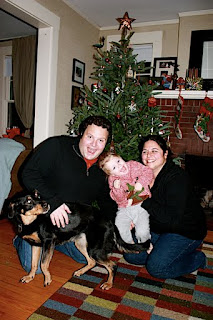 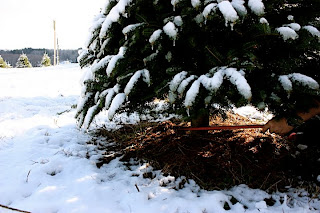 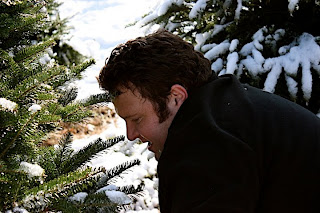 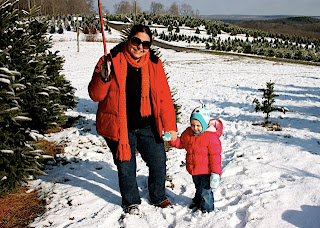 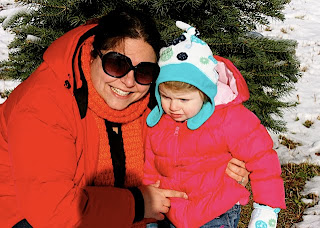 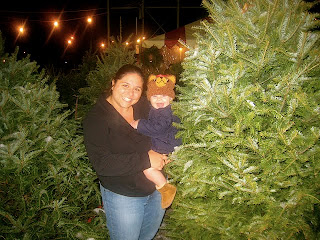 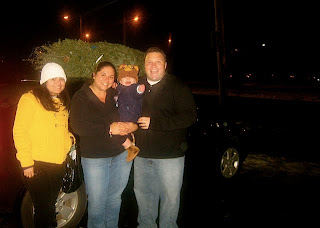 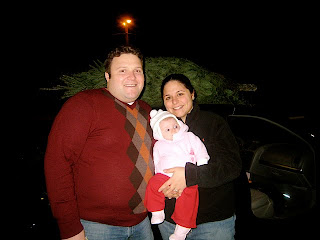 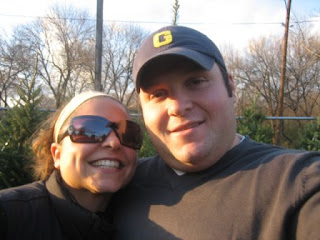 While we are on the Adult Highway we have yet to hit the Homeowner Exit. The life of a renter has treated us pretty fair. For the most part. We've had our share of great companies that had it all - responsive reaction time, excellent English skills, fantastic rent costs, cozy feel and great address.

We've also had our share of 3 flight walk ups, critters, Cinderella's mice, non-English speaking owners & slanted floors. Most recently we've had an interesting turn of events in what we thought would be super easy, super painless, super b.s.

Our latest adventure is a dilapidated 3 family home with approximately 7-8 people living above us. Anywhere between 3-4 tweens, 4-5 adults - 1 adult the size of 2.5. In addition to the mere size of these folks they also have gross & inconvenient habits. We're not sure which is the worst or who does what but it all kind of sucks. I'm not sure how or why but we drove past this place several times, all different times and never saw anything. No cars, no bicycles, no screaming loud music, no nothing. No mention of a menacing landlord, nothing.

Our landlord lives down the street and you'd think he was living with us. Most recently he came in (with out knocking) after ringing the bell and it not working. He was ringing the bell to let me know the outside light was on. He loves to let us know when we leave lights on/even though he doesn't pay the electric or we aren't leaving the house. I once walked out to my car to get something and in my return trip (less than a minute lapsed) he stopped me to tell me I left the office light on.

Anyway, he comes in fixes the doorbell and leaves. A few hours later I came home from picking up L at school and couldn't get in. He gave us one key to the front door - we made 2 copies. That's all we have - but the key wasn't working. There I am trying to get in - and L is saying "I try. I TRY!" I backed up and let her rip - nothing. Out of options I call him and ask if he did anything to the lock when he came in to 'help.'

He asked me if I unlocked the door before I left, confused I explained my every step - that I didn't do anything differently - I left and locked the door. Apparently there is another lock -he called the safety lock that he locked on his way out that you have to UNlock before you leave. Of course, since I didn't know about this added safety feature (of which I would never use anyway because I would never remember to unlock it before I left) - I didn't unlock it before I left.

Long story long - he came over and asked if the bottom of the back door was locked. I said no. He went ahead and tried to unlock the backdoor. It wouldn't unlock. He tried all his keys. He took a walk and came back with a 2 x 4. With out warning, with out explanation he took it to the window and let us in. 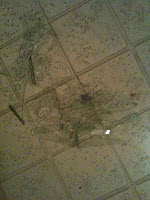 Apparently the key didn't work because there was another safety lock locked (not the bottom aforementioned lock... another freaking safety lock) .... watch out thieves - we have many a safety lock. He gave us the extra key - actually the only key he had to the back door.

Days later L was sitting on her highchair. C saw the key in the background, but didn't think anything of it.

And that's when she said, "Where'd the key go?"

Right down a rabbit hole in the kitchen. Whoops.

Email ThisBlogThis!Share to TwitterShare to FacebookShare to Pinterest
find it: Lbsession
Newer Posts Older Posts Home
Subscribe to: Posts (Atom)
(c) 2007 all rights reserved. aka don't be a D and swipe any content, photos, etc - sucka. Should you be tempted, let me know so I can be flattered and then give me something write about.