I'd been toying around with getting the kid's hair cut for a few months now. The end of September, I was getting a hair cut and L wanted one too. While I love her curls and her hair, it is a pain in the ass. Most importantly, she was bringing it up - she wanted a hair cut.  I try not to let the kid run the house, but she does have (some) choices and cutting her hair and style is one of them.  The ball & chain is down with this, for now, though I sense I change of heart when she wants to shave her head or dye it blue.   We might be a house divided if he does.  I'll try not to fast forward and focus on the issue at hand; a simple hair cut.
While my father still talks about my first hair cut where all my curls fell out and the color changed (impossible), I didn't want to be like that. (Side note: I now invision a scene in Disney's Tangled.   The one when Rapunzel's hair gets cut it turns brown.) It was severely traumatic (for him) and he has the hair from that dreaded day like a serial killer keeps a trophy of a kill.  He'll show you if you want.  I was not going to creep out like that. (Don't worry - the irony is it's about to get creepy.)  The night before the scheduled cut, her hair was PERFECT. Adorable. Amazing. Of course. Sure, she has ice pop face - but I had to take pictures to prove it.  To make matters worse I put it on the Facebook and got slammed for the possibility of a hair cut.

We got to the hair salon and after my hair cut she was NOT interested, so crisis averted. I didn't force the issue because like I said, it's her choice.  5 months later, as snow blankets the ground, there is proof that summer existed in her hair. The ends of her hair, mostly this little tail of curl remains in the back of head (that curl up there in picture one, taken in September).  5 months later, it is the blondest, tightest, knottiest piece of hair that has ever lived on a 3 year old's head. It is the curliest piece, it is the blondest piece and for all of these things, I am fairly certain Nana Lu is still mourning her loss. Every morning I expect to find it forming a dread.  While I dig that; dreads do seem a bit unconventional for a 3 year old. Randomly one night, I asked her if we could cut a little of her hair, it was still up to her. I explained her rat tail was kind a pain and would she mind if we cut it off? When I included the idea of "beauty parlor" she was in.  SURE, she'd be delighted - next can she have a manicure?? We had her take a bath, we combed out her hair and with a random scissor I cut the way back rat tail that was plaguing us daily.  For the grandparents reading:  yes we discussed that no she could never take a scissor to her head, no she was not to do this on her own, etc etc - will this come back to bite us? Perhaps.  I'd like to believe there are kids out there that have taken a scissor to their hair before ever receiving a hair cut.  It is what it is. I cut ONE piece.  It was only one part of her hair, though combed straight about an inch and half to two inches. I took a picture - mostly for fun and perhaps ceremoniously. 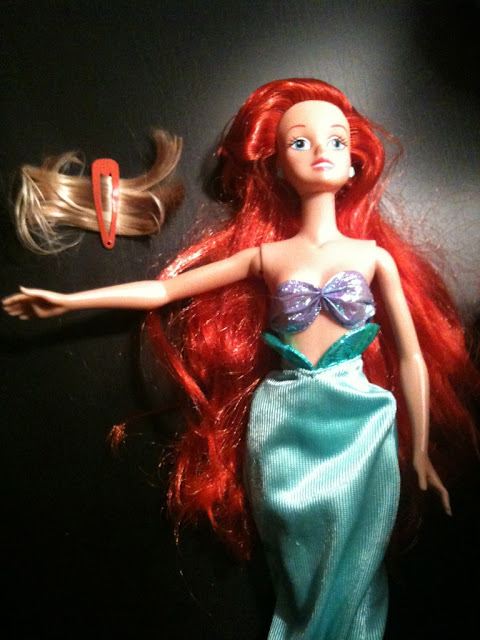 If I planned this (post) better I would have gotten a Tangled doll to use for scale! I suggested the hair cut, but she agreed. The clipped hair, which of course I mean to only save a lock for her baby book still sits on our book case. Full clip.  Serial killer like.  Also, her hair looks SO short now and I swear to God, it looks darker.
Creepy apple, not fallen far from the tree, Mama signing off.
circa 11:02 AM