Sometimes being caught with your pants down is a win.

I wasn't one of those girls that dreamed about how it would happen; the day my betrothed would ask for my hand in marriage.  I thought about it, but not the way I hear people describe... "I envisioned this day since I was a little girl."  That wasn't me.  That said? I certainly didn't think it would go down the way it did. Our story is not romantic. It is not dreamy. It is our story and ours alone. Also, it's to be filed under: it could only happen to us.

Disclaimer: this story is better told in person. I was inspired by Girls Gone Child to share. If you haven't seen her playlist of uber romatico proposals? Go check it out. Need a good cry? See people proclaim their love for each other. Good stuff.

Side note: I am so freaking glad this isn't on video.
Truth: there is a little bit of me that wishes it was.

The set up: Picture it, it was 2005 and I was in the throws of relocating.  I was moving from New York to Massachusetts.  We were going to live in sin after our long-distance relationship. Finally no more weekends filled with traffic. No more figuring out schedules and stressing over who would go where.  Same state. Same city. Same apartment. Glorious.

Before the glory, there had to be some pain.  That's where moving me comes in.

The week of the big move we talked about "the plan" - I figured he would take the train from Boston so that one of us could drive my car while the other drove the moving truck. But OH my Lord he kept arguing with me - he wanted to drive down. My argument: what are we going to do with TWO cars, ONE moving truck and TWO people?!?! He didn't want to take the train.  I later learned he planned to drive so he could speak to my parents, in person.  Apparently he didn't think ahead about the logistics of how many drivers there were vs. vehicles to drive.  At the time?  It was so freaking annoying. It made no sense.

When I picked him up from the train he was weird. So freaking weird. I didn't have time for the weird, I had things to do.  In addition to packing up my apartment, I may or may not have had some work to do. I suggested that we go back to my office, if he came with me I knew I'd focus and go faster.  Then we could go back to my apartment and finish packing. But OH my Lord he kept arguing with me - he wanted to go back to the apartment first. He wanted to change. My argument: you can change at the office?!?! He kept talking about getting a jump on the packing and he kept pacing.  I later learned he was just nervous.  At the time? It was so freaking annoying. It made no sense.

After just under two hours of him pacing around my office and longer than I intended to, we eventually get back to my apartment.  Gotta pack. Gotta go! And he can finally change. Jesus. What a woman!

The scene: My woman boyfriend was changing and I start in by washing some dishes. As soon as I start running the water I realize nature is calling. I gotta pee, but this pot has to soak.  I have a stroke of genius.  I'll let the water run on the pot and scoot in the bathroom.  I go in and sit down, just as the dog nudges the door open. So now I'm peeing with the door open. Even though we are moving in together we weren't quite at the point where we are peeing with the door open. I think to myself, "Self, I should probably get up and shut the door. Well, it'll only be a second and hey we've got to get to this place sooner or later."

The inevitable: Just then, I hear him.

He walks out of my bedroom toward the sink in the kitchen, because don't forget - the water is running. He thinks I'm doing the dishes. Instead I am on the toilet. Peeing.

So, for those of you that aren't paying attention. I'm peeing. I hear him call my name. I look up - in the mirror. In the bathroom, because I'm PEEING.  The mirror faces my bedroom door - which is where he is walking out of (freshly changed) wearing a different t-shirt. I see that he doesn't see that I'm at the sink. I see his t-shirt.

J WILL YOU MARRY ME

To catch you up, I'm on the toilet. Pants down and my beau comes in - pacing (again) in and out of the bathroom.

Laughing so hard- I might have peed my pants if I had pants on or I wasn't JUST peeing.

The End: Eventually I get some pants on (it took longer than I'd like to admit) and come out of the bathroom.  I (have to) believe there were some lovely words spoken.  Down on one knee he asked if I would be his wife.  I said yes to what will be a lifetime of laughs, an amazing family, a partner in life and as a token of what is to come? A story I wouldn't believe except I was there, a beautiful ring and a t-shirt. 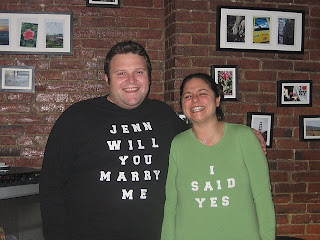