The week of February 23, 2015
For days I've been feeling off. Tired. I've been super stressed. A lot going on, so it all made sense. Then I got light headed a few times. Nauseous. My coffee didn't taste right. Crap. Now I'm getting sick. I haven't been sleeping lately, stress. A lot going on, so it all made sense. It's been hard to sleep, I've started to get tingly extremities. It's been so cold, record breaking cold - it must have to do with that.  You know, it kinda feels like when I got carpel tunnel when I was pregnant with JJ. But it's so cold, it can't be that.

Wednesday, February, 25th
Messaging with a friend, I just say it. I don't know where it came from.

Me: I know I am NOT preg. But I FEEL preg. Is that weird?
Her: Have you been nauseated?
Me: yes. in the mornings / late mornings. not first thing.
Her: since I know I'm not pregnant, I've been worried that I have some terrible tumor or cancer or something. I kinda want to get a CAT scan just to make me feel better. but I know that's nuts.
Me: you won't be surprised to hear -  my thought after... "wait, if I'm not preg - I'm probably going to die."
Her: isn't it terrible?
Me:  and I have this pregnancy test. ... still from Cman. Do they even LAST that long? and part of me - just wants to take the test. but then another part of me... wait for it... is like: eh, do I really want to WASTE this test? They are expensive. What if we actually try again? then I'm going to have to buy a new test box.  seriously. I have issues. It's literally calling me from the bathroom draw.  "jeeeeeeennnnnyyyyy just find out!!!!!!!!!!!!!!!! what are you waiting for? you know you have to peeeeeeee!!!"

And somewhere between 12:35 and 12:45pm the world stops. I thought, taking the test would mean I would have some confirmation I was not in fact pregnant and could possibly be dying.

The line, it comes through.

The only logical next step? I need another test.

I figured, before I picked L up from school? I would shoot over to the store. My dad was visiting and could stay home with the baby. My plan is immediately foiled because he wants to come to the store. After a panic, I realized I would ask him to wait in the car with the kids. He was none the wiser and off to the store I went.

I'm going to stop here and say: pregnancy tests are freaking expensive. $25 for peace of mind, it must be the almost expired test!

I grab them. Pay for it and go. But not before taking the box out of the bag and shoving it in my coat. Because I can't go into the car with a hot pink box of pregnancy tests.

Lady behind the counter, "Giirrrll! I KNOW it!"

I'm not quite sure what she knows. Does she know I have a 10 month old? That I was JUST pregnant? Does she know that the last pregnancy nearly killed me. Ok maybe that is some what dramatic. But when you are suddenly a mother of 4, you get to be dramatic.  Does she know we have 3 kids? This is 4? Does she know this is some Duggar shit? Does she know I've been talking about wanting 4 kids, but it was in theory. Not in for real life. Right? We weren't there yet.

And take the test I did. And you'll never guess what it said.

With my dad visiting, the kids awake and around, I wait. I have two sticks I peed on in my pocket for hours.  There is Criminal Minds episode somewhere in there. It would have been great to think of an adorable way to surprise the ball & chain with this news. But I also felt like the information in it of itself will be a surprise all it's own.

So once we got everyone to sleep, I threw the sticks on the bed.

Thursday, February 26th
I called my doctor's office. Whispering about needing an appointment. When asked, "What's this about?" I whispered, even more quietly, "I think I'm pregnant." The natural response? Laugh out loud cackling, "You girls always call like you don't know how this happened!" I start to say, "Oh I know how I ... {she starts laughing again I think in response to my cleverness} got myself into this! I have 3 others!" To which she says, "Oh I see that! That's why I'm laughing now. You were just here for a post csection check in."


The next few days & weeks
We've started to tell family & a few friends.  I'm not quite ready to go full fledged public yet. It just seems like a lot. Ideally I'd wait until closer to 20 weeks, I feel like that will feel better? I still don't feel great. But I'm not sure if I'll be able to keep all this to myself until then. Reactions have been interesting.  Though the most common reaction is disbelief.
I think most people are genuinely happy, but as much as I believe that - I do firmly believe there is some judgement by the few.  Misunderstanding or even some non-happiness. Like a sadness? Hard to pinpoint. They may never admit it, but I can feel it. And here's the best part? I don't actually give a crap.

And now you are caught up. 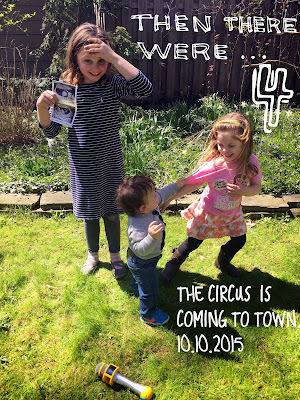 Email ThisBlogThis!Share to TwitterShare to FacebookShare to Pinterest
find it: Fantastic Fourths, knocked up knocked down