Last week C was traveling, yet again, and Cat was on vacation - with having to work we called in reinforcements. Nana Lu arrived into BayBack train station on Saturday ready to play. There were lots of tricks planned to be learned through out the week.

1) Eat with utensils
2) say "buono" with finger in cheek like a good little Italiano
3) blow out candles
4) fall asleep when someone says 'neenananeennananonononono' (kind of sounds like nails against the chalkboard humming).
5) walk 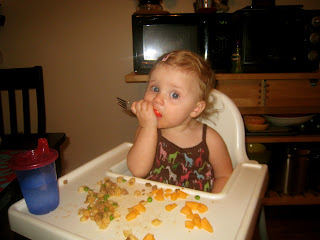 When I asked for a progress report on how that was going, I learned what I knew to be true - L would take the food OFF the fork and shove into her mouth. She doesn't like anything to get in the way between her and her eats. Another small glitch with eating with utensils - we don't have any baby utensils (we do now, but not this part week). And now that we do? Uses it backwards, after taking the food off the fork. 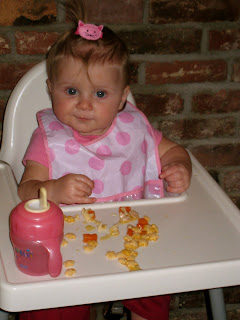 Another fun fact is that apparently the family is scared of the large chunks of food we try to choke L with. There are allegedly photos that scare people - I think I've found the one but I'm not sure since going through all old photos with food on them I realized even more than I thought they are all crazy. These are baby food puffs - how much smaller should I get them?

Surprised? No. Since C & I are continuously treated like middle school children who found themselves in a predicament getting knocked up we are always questioned. Like food preparation - when I cut pieces little, mother Coleman cuts itsy bitsy pieces. L's reaction? Grabbing as many teeny tiny pieces as possible together to be able to shove it in her mouth.

Trick 2 - "Buono" is a no go. This I wasn't hoping on as we've been signing to the kid for months and the only thing she has learned how to do in terms of communication is crying like she just got beat when we say "no." What she did learn this week was to know what shaking your head no means, with out the word "no." Sign language it is not - but communicating we are - if wailing a fake cry when saying no is communicating.

Trick 3 - no progress report to date, I think that was thrown to the wind due to the walking extravaganza.

Trick 4 - if the objective was to drive me absolutely bonkers - mission accomplish. Sleeping through the night every night I didn't have to have the monitor - also accomplished. We'll see if it lasts. What that had to do with that bang my head against a wall sound until it stops, I'm not sure. I won't ask questions.

Trick 5 - walking - she's practically running. She has overpriced baby shoes to prove it.

L loved her time with Nana Lu and even though I throw these things out there for comic relief - the truth is (and yes I'm capable of it) I don't know what we would do with out the week long visit. I got to not worry about my very long late nights away from home and even though I would have loved to be there that morning before 9am on Tuesday almost a week ago now when she took those 17 steps - I can't say I'm upset that my mom got to witness the big event. She got L back on a schedule, where before she came in to whip her back into shape I was being told that L wanted to 'loose her afternoon nap.' Hells to the no I say - and luckily Mother Coleman got my sleepy child back onto a fabulous schedule. We miss her already - mostly because it is nice to have family close and also because she made her award winning 10 layer salad that we lived on for the majority of the weekend. What is 10 layer salad? A little slice of heaven - if by little I mean a bowl of goodness I could eat for breakfast lunch and dinner.
circa 10:30 AM

Email ThisBlogThis!Share to TwitterShare to FacebookShare to Pinterest
find it: mi famiglia