No Sew Costumes, NO Problem


Have you seen those posts where people show you how to make things? Creating, DIYing as the kids say, crafting their talented arses off? This is not one of those posts. This is me documenting how I cheated the system and won.

One of my friends (you know who you are) may or may not have thought the idea of me making the costumes this year was a terrible idea. To quote her... "I feel like you are going to have to use a lot of duct tape to hold them together."

Usually she's right - this time? SO.FREAKING.WRONG. To be fair? There are only so many things I will be able to make that do not require sewing. I would LOVE to sew, to learn to sew - but I'm just not there yet. Someday, one day - I'll get there. But until then? I'm going to scour the world looking for no sew projects. This Halloween? I was able to throw together a Rapunzel costume and complimenting (low key) King & Queen costumes without a stitch.

Don't get me wrong. L's first, second and third year costumes were all store bought and couldn't be cuter.  But there is something about a homemade costume.  And while I was scared, I was also (pin)spired to do it on my own.  Last year I bought a homemade costume for L.  This year I wanted to give it a go.  I am compelled to share what I did because it turns out it really wasn't hard, time consuming or expensive. I saved a ton o money and frankly I am pretty damn proud of how Rapunzel came out.  Side note, knowing what I know now about tutus? Big time buyers remorse - from last year's purchase of a tutu. If you have a need for a tutu? Make it. SO.FREAKING.EASY. (Sorry, Etsy stores selling tutus at a premium - it's true.)

Here's how I did it:

The skirt = tutu like amazing.
I found directions on how to make a tutu (seriously easiest thing EVER) and I also found how to cut tulle the easiest way. I used the directions, but increased the length of the tulle to make the dress "floor" length. Note to self: if you are making a long tutu? Be OK with the fact that the skirt WILL be a magnet for all things... we found candy, crowns, leaves, dirt, flowers all up in her skirt.

The first picture below brings you to instructions on how to make a tutu - it is impossible to mess this up. The second is how to cut the tulle for the dummy proof tutu. It takes a minute to smooth out the tulle and wrap it around, but again pretty much impossible to mess up. For this kid's SUPER full 'floor length' tulle tutu I used 6 rolls of tulle clocking in at 2 bucks a roll. I totally could (and probably should have) used 4 rolls.  The whole project probably took me 20 minutes from start to finish? Maybe 30 minutes.

The shirt? All my brain child, baby.
Or I just didn't see it on the Pinterest.... I'm sure it's there somewhere. Everything amazing is.  But I have no where to link to because I claim to have thought of this myself. I don't sew but I needed ribbon crisscrossing on a shirt... what's a girl to do?

Timeout - the first time I was inspired by hem tape was when I couldn't find curtains for our kitchen that I liked. It's a long story but our kitchen is TOTALLY hodgepodge and it works for us, in this space. It's NOT our dream kitchen (by any means) but we love it for now and we spend good quality time in there.  Anyway, I wanted curtains somewhat cafe length and different patterns. I couldn't find what I was looking for (at a reasonable price) and the length of the window is SUPER long.  I took it on myself and made the ones I wanted.  How?

I purchased a bunch O dishtowels on the cheap and worked the hem tape magic. 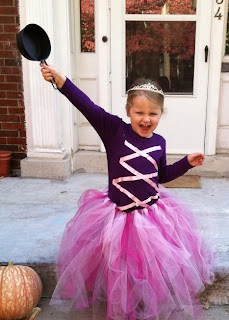 Time in: back to the costume at hand... Rapunzel.  I took regular run of the mill pink ribbon and underneath the ribbon I used hem tape (cut to size) to a purple long sleeve.  Since the ribbon was thin, I put cloth between the iron and the ribbon - and boom. Easy. Peasy. The ONLY thing I will say - take your time.  Once the hem takes take hold... it takes hold. I could have used fabric glue too, I'm sure. I didn't think of that until after the fact - when I was making the King's cape (you'll see).

The pot is a pot she had in her play kitchen - it was silver - but I covered it in chalk board paint. It could have been black spray paint. I made a magnetic chalk board for L's play area recently so it was laying around. Also - I'm obsessed with chalk board surfaces (notice the bread box above that is now covered in it in the kitchen shot) so it was only a matter of time I incorporated chalk board into her costume. She used the pot to trick-or-treat and we carried a bag she could dump into. A few times, anyway.

Her crown? She had - one of many. Funny enough though - she ended up using the crown I had made for myself for trick-or-treating - she liked it better.

I had thought... for a minute, I would complete this tutorial that I found - to make her a wig. I didn't realize until I sat down to do it that I did need to sew a bit.  How could I keep on with the No Sew theme with that? That said - if you really want to kick this costume up a notch I say wig it out.  In lieu of the wig we put a braid in her hair and stuck in some artificial flowers in. I never thought I'd buy fake flowers... nor did I ever think I would love them as much as I love these.

The King - we could have taken it up a notch, but we wanted to keep it simple. He wore jeans & a sweatshirt. To make (him feel) more regal?

How did I make the cape? You can see the tutorial below, but basically glue, fabric & gold trim. I think the total damage was $5 for fabric, $6 for the two rolls of gold trim.  Good news? The fabric I used for our background of the monthly pictures I've been taking. More on that, another day - also inspired by Young House Love and what they did for their baby girl. I didn't find it on Pinterest, but it's all over there as well because well - obviously.
Sure, the tutorial is for kids and a bit more formal than we took it - but there are other ideas to take it beyond the King of Jeans & Sweatshirts. 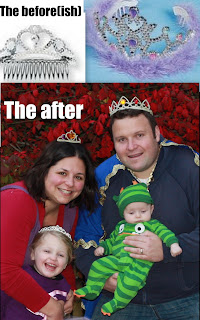 The crown was more stressful than it needed to be. I actually really panicked. I couldn't find a King crown anywhere. I almost just went with form or stock card board and then - I thought... wait a tick. Spray paint can make ANYTHING better. See if this were a real deal how to blog - I'd have the before and after... I don't. So instead I found online pics of the crowns (kind of) that I bought at Michael's. I took off the faux fur that was on the Princess tiara turn the King's crown and spray painted that bad boy gold-ish. I added some gem stones that I've been wanting to buy anyway. My comb crown came in a pack of 10 and was $2 (I know. Dealio.) The Princess tiara turn the King's crown was another $2.  The gems were probably the most expensive thing in all of the costume make up - but only because I bought the "value" bag, because I can't pass up a value- with a coupon it was $10. It turns out? I didn't need the value bag - there are a LOT of fake gems in a value bag. Oh well, we'll work it out later.

My outfit, it turned out I had - I used a shirt I had under a dress I had - I was really going for the Rapunzel "after" the haircut look - but L wasn't thrilled with us BOTH being Rapunzel she didn't get the overlap. Geesh.

JJ was a makeshift Pascal - wearing a Lizard costume I found at Target. I was going to jazz it up with a better hat and fashion a tail somehow - but with the crown scramble of 2011 time got in the way. Homegirl kinda got the raw end on the stick - but look at this face cute in whatever we put her in. 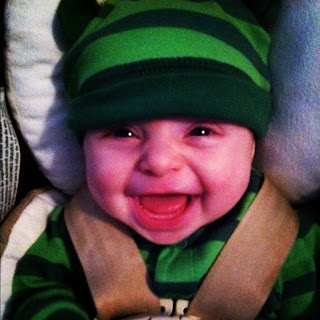 That's it folks. It's possible to make things, even if you are totally incapable like yours truly. Fact.

Email ThisBlogThis!Share to TwitterShare to FacebookShare to Pinterest
find it: DIY for Dummies, even I can do this, she's crafty, traditions