The Bug & the Beast 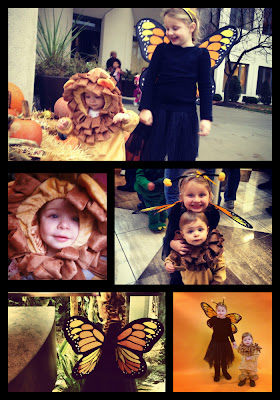 Halloween is delayed here this year. We'll trick-or-treat on Sunday. Maybe I'll have more pictures, but who knows. It's anyone's guess.  We have a long standing history of our love for Halloween. I mean, normally we're all - we are going to match, it's going to be epic.

This year, we were going to all be bugs. I envisioned some kind of "We're buggin out" holiday card. L wanted a butterfly, and we were going to have JJ get into that adorable ladybug costume, since the ball&chain staunchly refused to be a lady bug. Seriously. HOW funny would that have been?  I was going to be a bee and he was going with beetle or lightening bug. Instead? I couldn't find the lady bug costume, and needed to figure out a plan B.

We did the only thing we could do. If she couldn't talk what would she want to be?

She growls & roars. All the time. And she's a beast. Boom. Adorable lion, order UP.