Family, you can go ahead and skip this one.

Remember when I said my husband was 12 years old?

Perhaps I should have waited to hand down that judgement.

Just when I thought Elf on the Shelf couldn't get any more fun? I am proven wrong. Who knew the elf would be so much fun?

Now if I could only remember to move him nightly.

There's a contest that you just HAVE to check out.  "Inappropriate Elf Contest" - and it's filled with some seriously F'd up elves that just make me GIGGLE. People come up with some hilarious stuff.  When I originally heard about it I thought - I have the PERFECT IDEA. I cracked up over them for awhile. I won't lie.  Now, even though I'm sharing them, I know I might be the only one laughing.

Then I started to see the entries roll in and I saw that I had clearly misunderstood the intent.  I don't know, I think a little chat with the Peacock, Nutcracker & Alesssandro is hilarious if you see it the way I do.

Come on. Let the inner 12 year old in you giggle.

Have you checked out the contest? Go do that. I mean if it were a double entendre or euphemism contest, I'd be in.

Time out: both words sound dirty just to say them. Is it just me?  I'll double entendre your euphemism. That's what she said. (See beginning. I'm 12. Also, if we needed to call a TOD (time of death) of my father-in-law "getting me" I believe we can all agree, right about now. I call 'em like I see 'em.)

Time in:
Since it seems when Jill over at Baby Rabies said "Inappropriate Elf" she actually meant inappropriate "ELF" not "Inappropriate Elf Poser" I won't be holding my breath on the win. Hell, I'm a joiner and I just can't help it. I'm a sucker for some captioned photos. 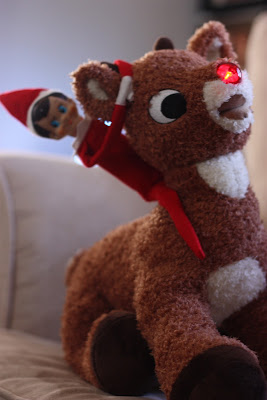 I don't expect to win. Dude, there is a the original creep stalker elf, Elf on the Shelf meets a Silence of the Lambs captivity scene,  * in a box and a freaking Dexter elf for God's sake.

Sidenote: Perhaps I was just flat lining before. Right NOW is the TOD of my father-in-law getting me.

I'm just a girl who likes to take pictures of my kid's footless doll. Also, I'm a girl who right now wishes family didn't read this blog because I'm talking blue bells and riding deer.  Never mind not 'getting me' - there are more out there that if they didn't think I was strange before? Let's just say - mission accomplished.

Email ThisBlogThis!Share to TwitterShare to FacebookShare to Pinterest
find it: Elf on a Shelf, Is it just me?, no whammies, rando