My wish for my girls: find a partner.


As I type this, here is what my surrounds are like:
It's the weekend, and so starts our routine. We take turns waking up with the kids. I got up with the kids, this morning. We watched a movie & snuggled on the couch. As goes with our sleep patterns, since the ball & chain fell asleep a little after 9 - when he slept in to 9:30, he got more than an allotted and suggested 8 hours. Refreshed, he came down stairs and started making breakfast for the kids.
We take turns in most areas. Though we have our roles and what we are good at - and we take the lead in those areas. He loves to cook, so dinner? He owns. I help clean up, but to be honest he is crazy about keeping the kitchen clean so he takes the lead. We typically take turns dealing with bath time. In the ways of balance, I make out in the dinner & bath routine. We use our powers (and obsessions) for good.

When it times to do a massive house clean, we take our areas. I'm the living room & dining room girl. He's the kitchen, bathroom & bedroom. He's obsessed. I don't fight it. Plus if I'm being honest, he doesn't clean the living room like his OCD kitchen cleaning self.
We are in the process of planning a vacation. He booked the main details (where, when, flights, hotels). I take care of the day to day plans. I worry about any organization to the lead up: packing, planning. I go over board: there are spreadsheets, outfit planning for the kids, supplies to acquire. I'm on it. Holidays? With the exception of a gift or two - I take the lead. I have lists, I shop sales, I work out shipping (when I don't forget), I get the deals - keep us under budget - which we don't actually have. But I keep us reasonable.

When the kids wake up at night, whoever wakes up first usually takes them in. It's typically him, mostly because he's a light sleeper. When we have babies, if I'm on maternity leave - I get them. With the exception of the weekend. Then, we take turns. Most times he insists on going for it. And never, not once, does he keep score.

Never, not once, will he bring up that he's washing dishes right now. He's likely going to take one or both of the kids to the gym with him at some point, this morning. To leave me in silence. I might clean up. I might not, I might continue to watch TV. It's hard to say.

I will end up brushing L's hair 9 times out of 10 over him. Because while no matter who does it - it's painful- it doesn't get me as frustrated as it does him.  Never, not once, will I care the snarl mayhem falls on me.

I deal with doctors appointments, school stuff, activities - in terms of sign up. The games or practices? He's in.  Something breaks, falls, needs to be hung - all me.

We need to move, and this happens often. I'm the details girl: coordinating, planning, tracking, planning (yea I meant to put that twice), new schools / classes / camps, new doctors, new everything? Me. Unpacking? Both of us.  Making the house a home? We both bring that... but I take credit for the design of said home.

I'll never understand how single parents do it. Bottom line, but (almost) more than that? When it comes to parents who are together and one isn't involved? It's a major unsolved mystery. I quite honestly don't know how it's done. To have another able body in the house who doesn't participate?  I know I'm one of the lucky(iest) ones. I know that men like my ball&chain aren't the norm. I know that most every day, at least once a day, I am grateful to be the exception to the rule. 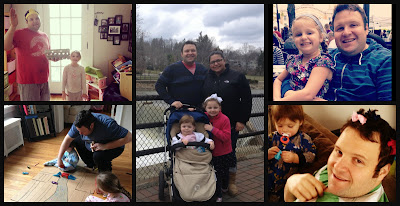 I want for my children to be happy & healthy. Forever. Beyond that? I want them to find a partner. I want them to be the exception to the rule. Whoever their partner may be, I wish for them to find a true partner.  One who they balance out with, because any other life would be unimaginable to me.  I may be one of the lucky(iest) ones, but I need them to have this. I need them to know it's possible.

I hope what "they" say is true, by growing up - seeing this reality - that they will know it's out there for them. I just hope they find it.
circa 10:23 AM