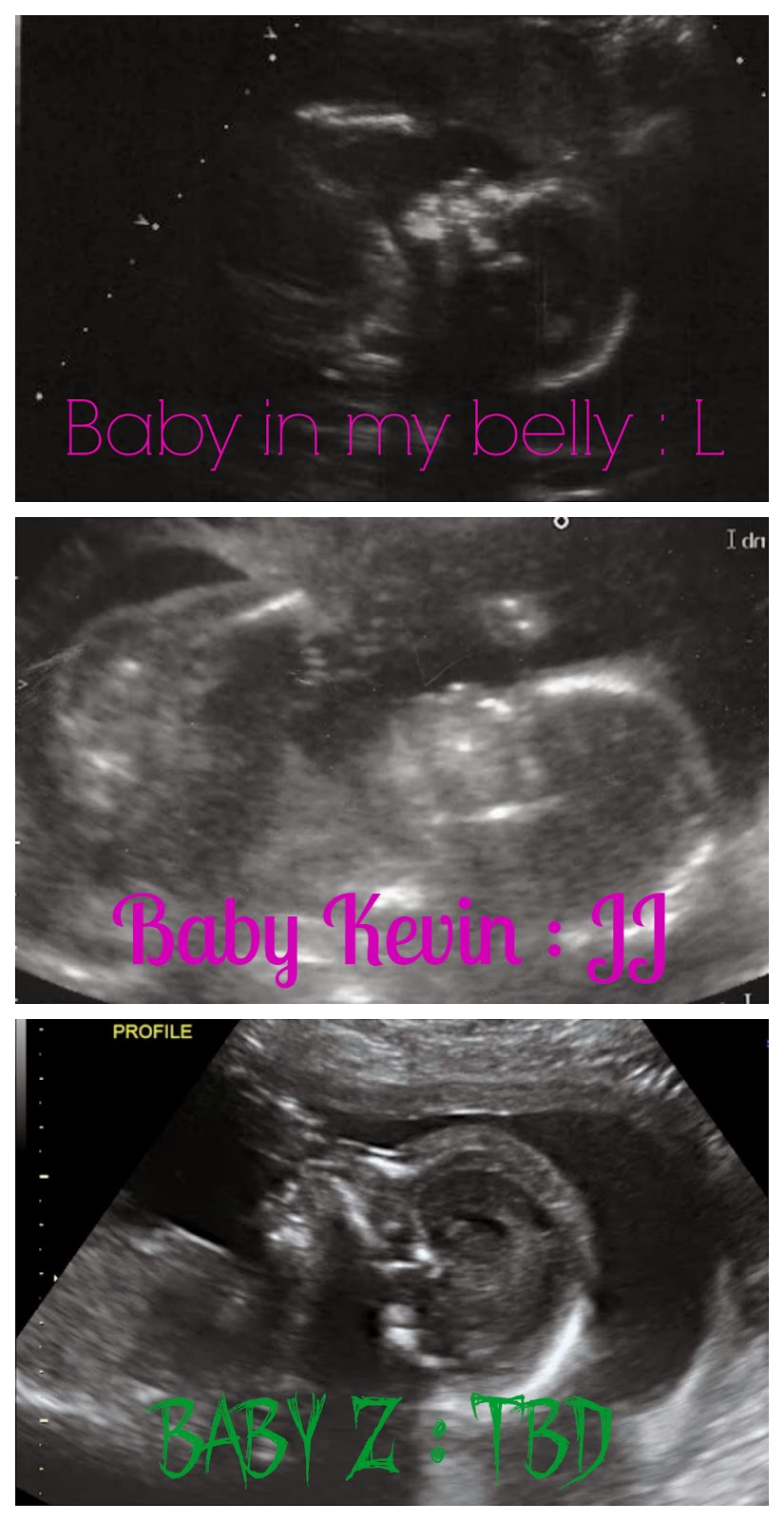 A few weeks ago I took the big kid to a sonogram. She doesn't remember going with JJ & she remembers everything. Frankly, I didn't think she had ever gone before either, but lately I forget everything. I thought I'd take her out of school a little early and we'd go have a big girls day out.

Side note: it turned out she got invited to a play date that afternoon so while she did still choose to come with me for the appointment she ditched me shortly there after for a girls night in at a friend's house. Pizza dinner and a movie with a few girls from her class. Because she may be 6 on her birth certificate, but apparently she is really a teenager.

Little known fact: the pictures of yore are out. Creepy 3D Sci-Fi is in. I did get one good ol'standby.

I took a look back and all the kids look the same, though to be honest - I can't find a good pic of JJ's sonogram. Middle child, she was born and her fate was sealed.  Remember when we called JJ, Kevin? This kid I've been calling baby Z since the beginning. Z for zombie because (s)he's eating my brain. That said? Now (s)he's taking the life out of me.

In looking for whatever we called L when I was knocked up and knocked down with her I found this post. Where I took tests and it told me she'd be a girl. I took the same tests. This is what they said.
But I digress.


The truth is I was afraid of what this appointment would kick up for her. She has asked me twice about babies - how they get into one's belly. She's super specific and asks a lot of detailed questions that there is no broadly answering something with her. If you are too general you are met with follow up questions. The first time she asked, I was pregnant with JJ. I was able to get out of it. More recently she remembered I'd never asked this question (2+ years later, people). We were talking about the baby and she said, "You never told me, HOW did the baby get INTO you? HOW DID it get IN there??"

I punked out, again - "Oh, why don't you get that book we have about it - we'll read it together."
That book does exist. It has super specific photos but doesn't actually explain how the baby gets in there. It talks about how the baby lives in there. But that bought me time. As I had her sift through 100s of books looking for the one, I then found a TV show she likes and since TV is a major treat? I dangled it in front of her like a dealer to a junkie. Her curiosity killed by the drug of TV.

I knew, if she asked again, I had to do it. I had to figure out a way to tell her - but the truth is I still don't know what I'll say.

Luckily? She was more curious about what she was seeing.

The sonographer was a peach, let's call her Suzy Sunshine from here on out {sarcastic font}. I mean, here is this adorable kid, so excited to see her baby brother / sister and NO interaction is provided. I'm not saying you have to keep her entertained - but a little guidance as to what we were looking at would have been lovely. Because instead it went like this.

Me: "Look, L - I think that's the baby's belly!"
Suzy Sunshine: "That's the head." Said in super condescending tone as if DUH. HOW do you not know this.

And it kind of went like that for each region of the body. These appointments are about an hour due to the amount of testing that has to be done so it was super fun {sarcastic font}. Besides needing to take measurements of everything, the baby tends to be super disagreeable on these things. On more than one occasion I have had to get up, shake around or lay on either side. Sometimes, without warning the sonographer will shake my belly like a god damn Magic 8 Ball. To which I want to to say, "Concentrate and ask again."

Probably the best one went a little like this:

Suzy wasn't fun. She did not appreciate the adorableness that was the kid and asked me approximately 3 times if I was sure I didn't have gestational diabetes.  As if one forgets that information. The test I proudly (once again) and against the odds passed, unlike tests of yore.

But she didn't get the best of the experience. This kid did. Both of them.

Email ThisBlogThis!Share to TwitterShare to FacebookShare to Pinterest
find it: knocked up knocked down, Lbsession, third times a charm