Monday night I noticed the baby’s finger was red – at closer examination it was swollen.  Her middle finger was almost hot and the red discoloration went from her first finger pad all the way down and around to the palm of her right hand. On the top of her finger, there was a puffy could be pussy little pocket of infection. I know, gross – and totally out of nowhere.  For the first time, as a parent, in almost 4 years we called the doctor “after hours.”  I think that’s a pretty good run, if I do say so myself.  We just never had the need before. And while I was sure it wasn’t life threatening, her little finger was hot and clearly infected.  The other thing that concerned me was how quickly it happened because to my recollection when I was bathing her an hour earlier, I don’t remember seeing her finger like this.

We called the doctors office, spoke with the message center and got a call back from the pediatric nurse on call at the hospital.  I anticipated a homeopathic suggestion like epson salt or warm compress. Instead I got something to the effect of: “Run do not walk to the ER.”

For the love of G-O-D, please refrain from using such words as: critical, imperative, complications or immediately when speaking to a parent as it relates to the seriousness of their child’s condition.

Thank you,
Parent who shat herself

I googled complications that the nurse mentioned on the phone; I fell down a google wormhole on the way to the hospital (I wasn’t driving – relax) of panic.  I did all I could to remain calm, mostly just cursing underneath my breath.  It’s scary.  They were worried how the infection and coloration was spreading (quickly) and without reason.  It wasn't started through a cut fingernail or cut on her finger.

We arrived to the ER and as promised, our name was “left at the front” so that we could quickly pass through to the Pediatric ER.  Any emergency situation is scary, but might I be so bold to say that a Pediatric specific ER top 5 scariest places on Earth?  Are we agreed? Super. Probably as scary as a… I don’t know? Let’s say a NICU?

I’m trying to keep it together. As we waited to be admitted C realized he forgot his cell phone in the car – so he left me. Our history should have told us this was a bad idea; what you may not know is whenever he leaves me (even if for a minute) in a hospital something goes awry. As I breathed through the stress of bringing my baby girl to the ER in the middle of the night, albeit 8:30 pm, I thought I was doing okay.  It’s an infection. It’s just her finger. Everything will be fine. Breathe.  As I'm thinking this I look down at my baby girl. She was sleeping soundly, if anything was wrong we'd know, she'll be fine. We'll be fine.

Ah, how peaceful it is (before the storm).

It's right about now we get called in. Me & my baby girl - walk through the automatic doors into the waiting room for the Pediatric ER. As we walk into the room, I notice a gorgeous aquarium wall. Breathing in the moment, I realize I can't breathe out. My breath is quite literally taken away. I can not exhale and instead I'm immediately (hysterically) crying.


By the beauty of the fish? Not quite. 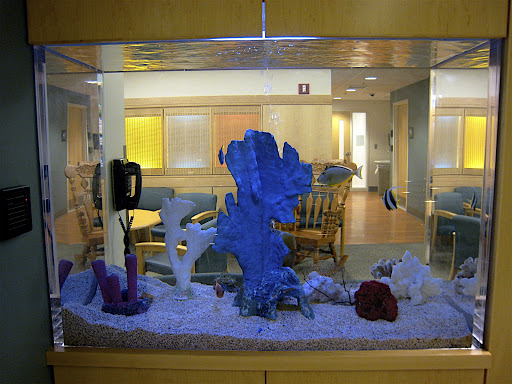 I'm having what I can only imagine is a mini panic attack.  I'm panicking and all I can see is this fish tank. The picture you see? It's not what I saw that night. It was the aquarium at Mass General Hospital. In the NICU unit L spent a month in. Sheer. Panic.

My dear husband came back.  He returned to find his previously (somewhat) sane wife now in a corner (not facing the aquarium, because well - obviously) in a pile of tears.  In the minutes he was gone, all I could do was struggle to breathe through flashbacks as I would imagine someone with PTSD would do.

God damn f'ing fish... I thought they were supposed to be calming?

Fast forward: I pull it together and don't face the damn tank.  In terms of our "emergency"? JJ is fine. I'll spare you the details - but there was some minor blood shed, major tears lost, (another) small piece of my sanity taken and $100 for the visit.  At the end of the day? Basically homegirl had a (very aggrevated & infected) ingrown nail.

Baby's first ER run and we were home within a few hours; nothing serious (thank God) to come of the situation - but perhaps just a quick moment and reminder of how lucky we are. A slap in the face - a reminder - what not to take for granted.
circa 7:19 PM