I had SUCH high hopes for this maternity leave of mine. I was going to organize things: the basement was going to go from mess to 'mazing (as in so AMAZING you leave off the A). I was going to read books. I was going to write (here or) anywhere. I can barely press post on things I've already written and just a need a quick look over.  I published this post earlier this week (edited to note, by the time I press publish on this post? It's more like 2+ weeks later), even though I wrote it a month ago. I guess I forgot to press publish? Since it was about life PRE JJ, I had to back date it. That just seems like cheating.

I was going to give this space a face lift - finally choose a new name, new URL, redirect links, update this bad boy visually. We all have pseudonyms in my head - not just letters. Why you ask? To ward off worrisome family members who believe we are going to be targeted. Scary world wide web and too many 20/20s have been seen.

Truth, that's more of a line: as I have thought of said creep situations too.  I watch too many Criminal Minds to not think worst case scenarios.... I digress. 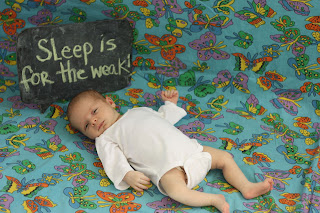 You know what I have accomplished?

Obviously I had a big uterus hand in creating and carrying (not that counts for more) yet another beautiful baby girl. JJ is amazing. She is adorable. She is precious. She is STRONG. She never sleeps when it's dark.And while I've always liked vampires, the fact that she might be one is worrisome and frankly cramps my productivity.

I'm trying to make sure that JJ doesn't meet the fate of 2nd born children around the world.  I want to make sure I take as many pictures of her, as I have of her sister. The result? I've taken more pictures than I can handle editing, so you may never see them.

Maybe you don't think this is brag book worthy. Maybe you are laughing. Maybe you think I'm over exaggerating. To this I say: you can't possibly understand how much water I have been drinking since JJ got here. Seriously. The hospital gave us water bottles - to support my habit so I can't complain. I suggest having a baby if for no other reason than having him or her at Mercy Hospital in St. Louis so you too can be the owner of this bad boy. Which leads to, I'm drinking all this water because this kid is eating. Which means I am feeding her. Constantly. Well, not right now - but with any key stroke she might awake and this will mean lights out on this post. Just the thought of what is to come, makes me thirsty, because I'm going to have feed the baby - it's a vicious cycle.

{True story: she just freaking woke up, as I type this - the beast is awake. Let's see when I get back to this. It's 5:30 pm on Wednesday - this'll be a fun little experiment, won't it?}

Spoke too soon, game off.

So that's how that works - I didn't even mean to make this point when I started the post, in fact there was some other point I was going to get to but of course since I didn't write it down - it's lost and gone forever. I guess accomplishing 3 things over the last 7 weeks - especially due to their magnitude (seriously, do you SEE that water bottle?) isn't too bad. There are of course a million other things going on, simultaneously, and I'll try to get to them if not for keeping you updated but so that I can be reminded of them someday. Until then, please forgive this intermission and in frequent updates. I'll do what I can do, when I can - but between the kid, the pictures and the water I'm handling about all I can right now.