Well, kind of. It turns out it's getting so crowded up in there- that while according to the doctor it's not time yet (but to be fair she didn't exactly check, if you know what I mean). She felt around, moved baby G around- made sure to confirm (s)he is still head down but in the process of it all pissed him or her off. Apparently the babe was comfortable where (s)he was so for the following hour or so (s)he tried to get back to wherever (s)he was feeling it.

As a result, I was pretty sure that the child was literally going to be coming out of my belly - but through my stomach- not the good ol'fashion way.

The other night I was convinced that someone had given my child a weapon or something because whatever was literally cutting through my abdomen was not the usual foot or elbow. I'm talking nunchucks or a machete in possession. I lay screaming in pain on the couch, C came RUNNING in, almost tripped over the changing table that was oddly placed in the living room after we put it together- running through the staged curtains, panic in his eyes.

Silly rabbit- he thought I was in labor or something favorable like that. Nope, no such luck. Just our very own flesh and blood torturing mommy for laughs. 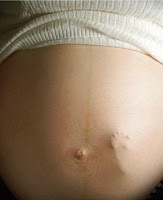 *this pictures is a dramatization, no real people were injured as a result- we believe it to be a photoshop masterpiece. NOT my buddha.

Email ThisBlogThis!Share to TwitterShare to FacebookShare to Pinterest
find it: knocked up knocked down