Rolling With The Homies

Turns out our kid has an ear for rap - true story. C mentioned that when driving with her if she freaks he puts on a little 94.5 and boom she is good to go - it soothes the beast. Last week we journeyed to the 'Burgh and then CT and wouldn't you know we needed to test out the theory.

Miles to go before we eat and no need for a diaper change what to do? Whining at an all time high and stress levels high... throw in a little Kane and let it ride! As soon as she heard the sweet sounds of Graduation she stopped whining immediately. Big fan of that Kane West, but who isn't other than MTV? Today I came home and her hip hop persona continued to develop.

Bah bah bah
Throw yo hands up in the air - wave yo’binks in the air like you just don’t care – say YEAH!
YEAH! 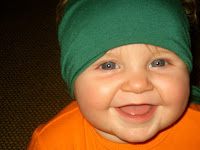