And here you thought the story was over. No not so, silly rabbit, I just haven't posted the conclusion. If a post is never published did it never happen? Alas. That isn't the case. Play catch up, if you will.
Chapter 5: The Calm

In the morning we met and began to review the plan ahead of us. As much as we were discussing the new and delayed agenda doubt began to sneak in as the snow outside continued to come down and reports continued to come in of delayed or canceling attendance. The long (and chapter 5) and short of it is - we canceled the meeting. Every one's safety was of the utmost importance and to really get what we wanted out of the meeting we needed everyone there. There we were. There I was, 15 hours deep into commute, only a few hours of sleep to my name and all of that to be stranded in Neuvo Jersey.

I laughed. Uncontrollable, 5150 laughing. There it was again.

When you get handed a snowmageddon, you make snowmen. While the Boston crew high tailed it out of there - I may or may not have squealed "NOOO NO ONE IS LEAVING UNTIL I GET TO!" After I got over the loss of freedom I realized there was fun to be had. And had it I did.


But wait... there's more - like every experience like this has to have? A celebration of survival. Girls just want to have fun, style. And in the end? In the very end... 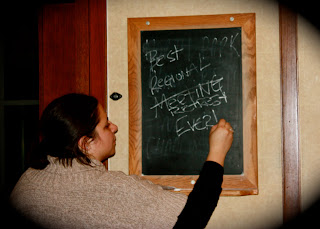 Email ThisBlogThis!Share to TwitterShare to FacebookShare to Pinterest
find it: travel-aster