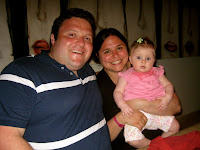 Once upon a time there was a flier that boasted discounted rates on a fun evening watching cooks fry up eggs making fried rice from scratch, flipping spatulas and wacky songs. Hibachi fun at it's finest. The King & Queen thought it would be a fantastic idea to bring the Princess to experience the fun.  She loved it at 6 months, why not at two and a half?

Upon arriving, the Royal Pain in the Ass Family was sat with two other girls who spent their evening texting and didn't so much as crack a smile. Waitresses flocked and doted over the Princess while the she colored in her Hello Kitty coloring book or as the Princess affectionately called it "Big Cat." All was going picture perfect until ... the show began.

After consistent freak out, and taking turns eating dinner, they got it all wrapped up.  You know what is weird? Eating at a hibachi table, alone.  While the Queen & Princess did laps the King enjoyed catching pieces of chicken in his mouth.

On their walk back to the chariot the Royal PIA Family realized one very important fact.  They forgot about their coupons and were carrying home the most expensive take out meal in the whole wide kingdom.  All the could be done is interview the Princess.