There are mountains of bloopers I will need to highlight in time.  It's my bag, it's the way I roll.  Today?  Today I need to talk about the light. Moments of amazing women (and even a few men) giving their work, passion, struggles, time, effort, accomplishments, joy, and pure unadulterated good juju.

How was the weekend? Kick ass.

Oh what? You want more? Now look what you did.  Here are the top 5 reasons my weekend kicked your weekend's ass. Unless you were there, so you might have some different reasons but I'm hoping it was just as ass kicking. 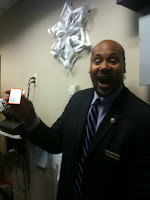 1. Humanity and good deeds were freaking everywhere. Was it flawless? Hell no. It's New York City for god sake. Who needs perfect?  It was as close as close could be.  From small to large events of wonderful, I was taken aback. On the teeny tiny scale - I lost my camera. I know, not shocking. What WAS shocking? It was brought to Lost & Found. My gorgeous tiny brand new point & shoot.  My response to the lovely hero and security team member at the Hilton New York? "SHUT UP. SHUT UP!"  There was a brief moment where they thought they lost my camera, IN lost & found. I screamed shut up at him so I gave him a few minutes to collect himself and my camera. I mean look at that glorious man... screaming "SHUT UP!" right back at me? Swoon the hero who found and returned my glorious camera. Beyond this quick do gooder moment, there was the story of how a little boy and his family get to be a family for as long as they absolutely can. It's too much to feel and too much to write here, so I wrote about it there.

2. Knowledge is power. The conference offered sessions that were immense and amazing.  The best part? There were people in each breakout live blogging the content, podcasts will be posted and some bloggers like Capital Mom were live tweeting. It was fantastic. Since I haven't figured out how to clone myself just yet, I'll be listening to more than a few of the sessions offered and probably re-listening to the ones I did go to. I am going to expand on all this later, because really? It's too much.  Ultimately the message: HOTT subjects with amazing speakers and fantastic audience participation that drove the content. Perfection.
3. Busting through my comfort box, ninja style.  This weekend I went outside my comfort zone, 100%.  I walked up to people, sometimes with my partner in crime, Actual Mom (I feel like we're fighting crime), making small talk and chit chatting (two things I am not a fan of initiating with strangers. See "stranger danger"). Many times I was alone. Personally, this is absolutely gigantic for me. Asking questions, answering tough ones and telling stories. While I heard about this whole "strangers becoming friends" thing and thought it was a load, it is in fact the case.  One night, for example, flying solo with out my wing(wo)man I was able to meet up with a few women who became fast friends including the solidarity of (barely) getting through the next day. More on this later.
4. Don't believe the hype.  Before I left I heard about "big bloggers" vs. "little bloggers." To be fair, I only heard about this buzzing, never really any specifics - so this could have been my own grapevine.  I didn't read anything that specific people were unfriendly, maybe it was just that others were intimidated or the people they met last year weren't who they thought they would be. I don't know.  For me it was like I was about to attend a high school reunion but I didn't in fact graduate in the same class.  It's like I just transferred.  It's intimating. It was for me.
There were more than a few bloggers that I did want to say hello to and introduce myself to.  I read them on the regular and hoped to say "hi, big fan" and all that. There was one in particular that I wanted to meet.  Kristen Chase, over at Motherhood Uncensored was the first blog I ever read, Shaniqua forwarded her blog to me. She was also the first blog I delurked at to comment.  I was so nervous and so weird about it (Who is this stranger commenting? What is SHE talking about? See "stranger danger").  I wrote my full name out like a big ol'dork.  Also like a dork I think I opened with that. I had seen her out and about through out the week, like many of the people I read daily or every once in awhile, but hadn't yet had the nerve to walk up and introduce myself.
Side bar: how weird is it to "recognize" people that you have never really seen in person? And my order of the above sentence full of links is in no particular order, if you were wondering.
Ok back to the scene at hand.
Me: "Hi, my name is Jenn. I just wanted to say hello - dork alert. I'm a big fan. You were the first blog I ever read, first I ever commented on - I even used my full name. No one calls me Jennifer unless I'm in trouble."  Something like this - but it's pretty much verbatim, verbal diarrhea of the mouth. Creepy, right?
Stop making that look.
She was LOVELY. Absolutely lovely - and we sat down and chatted about many a subject. Things on both of our blogs, left 'behind the scenes', the conference, family, friends, the gamut. Lovely.  She introduced me to one of her friends, also someone who I read regularly.  She was lovely too. I don't know what all the hype was about or who people felt were "too big" to talk to the little ol'bloggers of the blogosphere because that was not my experience at all. There were tons of wildly read bloggers, authors, executives, professionals, etc etc -and everyone seemed absolutely open to the random stranger extending a hand. Lovely people, people. Seriously. Maybe stranger danger isn't so dangerous?*
*Dad, this is just in the context of the story. Don't worry.
5. The pure art of it.  BlogHer Voices of the Year and accompanying Art Show. Purely (I kind of just want to curse through out to really bring it home, for serious) fantastic. In 2008 BlogHer started to recognize writers and designers for different work, submitted in five categories and out of 90 finalists (1000 this year were submitted), 3 from each category read their piece. I'd say each one was better than the next, but that would be lie because I felt each of them were amazing in their own completely different and amazingly touching, deep, hilarious and brave way. Unfuckingbelievable. (No choice. True story).
What's your story?
circa 9:58 PM

Email ThisBlogThis!Share to TwitterShare to FacebookShare to Pinterest
find it: #BlogHer