Oh happiness. Christmas miracles of Christmas miracles. Let me set the scene. This post started, to date of my completion and re-read the 26th of December. Keep that in mind, based on the publish date; whenever that might end up being.  As I go through, I realize this bad boy has to be in two parts (Hooray, two posts taken care of! CHECK!) That’s how busy we’ve been or been busy relaxing in-between the next ‘course’ of family visits.  OK, now back the 26th… this feels like virtual time travel.
We are gleefully sitting on our couch.  Snugged up, candles burning & kid napping.  Christmas amazing. I am typing from my wireless keyboard to my iPad. Oh yes.

I'm sipping an ice cold drink from A Christmas Story glass and we are snowed in.  Oh yes we are. This is truly the best Christmas eva. We've had a house full of love, celebration, relaxation and Christmas magic for days.  It wouldn't be a family gathering with out a little yelling (it's how we communicate) a touch of cussing and a few minutes of aggravation.  If it was missing any of these components we would have been at someone else’s house - likely other people all together. Despite the plan to stay home and not travel, we got (mostly) that.  Traditions began and our home was the meeting place for the holidays, for the first time ever. Though I think we hosted an Easter a bit back, when we were in Boston. This was very different.

Nana Lu & Uncle Ricky arrived Christmas Eve, quickly followed by MyUncleChris. The first tradition we introduced was having a relaxing and stress free dinner. I highly suggest it.  Basically, you don't make dinner at all. Who doesn't like appetizers? We noshed through the night, watched Christmas movies and set up for Santa. Milk & cookies (that L helped to make & decorate) for the big man and carrots for his ride. Magically wonderful.

Christmas morning the kid woke up at the reasonable time of 7am.  Not bad. She ran to the living room to see that Nana Lu wasn't there, as she expected. She was out walking the dog, to prepare for the reveal. I asked her, "Where do you think Nana Lu is?"
Quite seriously she responded, "Maybe she's with Santa or somethin?"

Santa delivered many a present to our good little girl. Some might say he went overboard, but I would maintain that he found some serious deals. The good news?  He also got the wrapping done early.  The bad news? Only a few presents turned up with out a label. What's the worst that could happen? They must all be for the kid of the house? Right?

L's first present she opened knowing Santa Claus had picked them just for her was.... (drum roll please):
A pair of oven mitts. Perhaps meant for her father... maybe, maybe not. 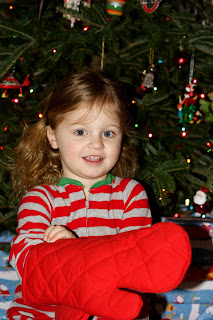 About three presents deep, she was done.  Not done as in, no more presents to open.  Done as in, she was all set with the whole thing.  I can't be sure, but after prodding and (honestly) bribery, she finally got through her goodies from Santa. Including endless coloring books, play dough and other random tchotchke Santa had been saving since he went to BlogHer.  A paint set, additions to her dollhouse, markers and crayons, oh my. Barbie & her horse and some alternative clothes to change her up in.  Side note: Barbie dresses pretty loose if you ask me. Since Santa figured Barbie might need a Ken, the right thing to do would be to make sure Barbie got the right kind of Ken... like an Edward instead. Oh yes I he did.

Picture compliments of MyUncleChris who promptly posted this pic and the following caption on Facebook: "Ken is not allowed in my sister's house so Belle gets Edward for a date this christmas."
With the opening of a bike helmet, we thought it would be clear that a bike was "somewhere" under the pile... like the largest present front and center of the fireplace, under a bike sized bag. Oh boy - she doesn't have the finding gene of her father.  Did you know he once found a contact in a swimming pool? True. Story.

Also a true story? It took her about a half hour to figure out that the giant bike sized bag contained a bike.  I didn’t get too many pictures from the morning, but I did get this one – this is the exact moment she screamed, “I FOUND MY BIKE-A-KLE!” 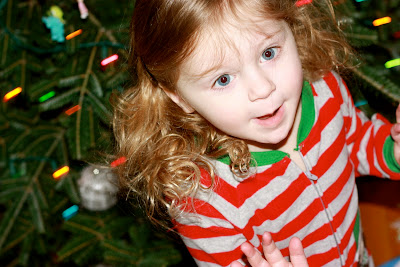 I leave you with the look of Christmas magic .. to be continued...
circa 6:02 PM