Preface: I'm not a huge fan of cliff hangers, especially because this story isn't really going to wow you.  You'll likely say, "DANG girl. Pull it together."  Obviously, I have the move on my mind.  I want to tell you what the deal is, but there is some background information you need to understand before you will get the next part. This here is the foundation of the next part of the story.

I told you, people are nicer in the Midwest. In reaching out to people, all kinds of suggestions and thoughts of areas to live came flying at us like stay west, never south. Try areas like: University City, Central West End, South City, Kirkwood, Webster Grove, Brentwood, Clayton, Ladue, Parkway West - another language all together if you ask me. We looked into all of them and that's when I fell in love. 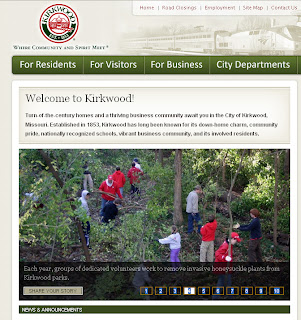 We first set our sites on Kirkwood, MO - what I began to refer to as Magic Town. Why? It is magical! Community feel. Downtown area - shops, bars, restaurants, tons of activities for young families, I'm liking it.  See for yourself: the Kirkwood website makes me want to skip. If you click over, there are different pictures of the area, events, etc. Picture 4 (featured to the right) looks like children looking for a lost child. Perhaps a search pattern or something? It's not. Just them looking for honeysuckle trees...which  just happens to be one of my favorite childhood smells, EVER. We had a honeysuckle tree in our backyard growing up. This place has so many that they need a search party to gather the extras? Yes, please!  It also has a community pool which boasts a lazy river, beach pool, lap pool, kid pool and events planned through out the summer. I hadn't heard of a community pool growing up, perhaps an episode of The Wonder Years - but not in person. When we moved to the town we are in now, we were taken by this concept.  We loved our pool last summer, but a lazy river and scheduled events we did not have. OH GLORIOUS.  The parks? I don't have pictures of the parks we saw but the bottom line is you haven't seen a park until you've seen a park in Magic Town. End. Of. Story.  Kirkwood is a suburb of St. Louis.  We are in tje suburbs now and don't tell anyone, but I LOVE IT. LOVE. I don't miss the city or living near a city at anytime. Nope. Allegedly I live near a city now, but this one doesn't count. NYC or Boston? Those are real cities.  I love them both, but I don't miss living in a city, at all. I didn't know, when we left Boston I was glad to leave, but the truth is - PEACE OUT CUB SCOUT! I'm a suburban girl, it turns out. City living is for the young whipper snappers.

Just when I think I know what I want, BAM.

University City. It was like Hoboken (NJ), Brooklyn (NY) & the South End (MA) had a baby (what can I tell you - I'm making a baby). Cute little neighborhoods, gorgeous brick houses with a ton of character. Close to the Loop - which is a six block area with more than 140 specialty shops, eclectic restaurants, galleries and live entertainment (says the website) = Fun. Fun. Fun. I loved it. Next door to UCity is Clayton, a desirable neighborhood - great school system. All the neighborhoods are built around elementary schools - so you walk the kids to school which for some reason I am a sucker for. I kind of put both these areas in the same pot, despite being slightly (or very) different in terms of schools & price. They too had a community pool (not as kick ass), a great community fitness center, and all kinds of people.  It is super close to the main areas of St. Louis but far enough to be neighborhoods with their own character. Just love. One might say, the best of both worlds.

Those are the two areas we are focusing on. More on the hunt, later.


Intermission: Last Friday, in the middle of House Hunt 2011, we went to Blueberry Hill for dinner.  It's a landmark restaurant (great burgers, wings and the best damn house salad dressing I have ever had. EVER.) filled with pop culture memorabilia. Memorabilia including but not limited to album jacket covers of a local celebrity, Nelly. He's from the STL.  We learned that night that his debut studio album was Country Grammar. I'm not sure why, but I thought the phrase Country Grammar was hilarious. I googled it today as I prepared to write this post and found the video of the song. I remember the song, but at the time it had no significance to me. Now? Now, this here is going to be my baby's hometown. Country. Grammar.