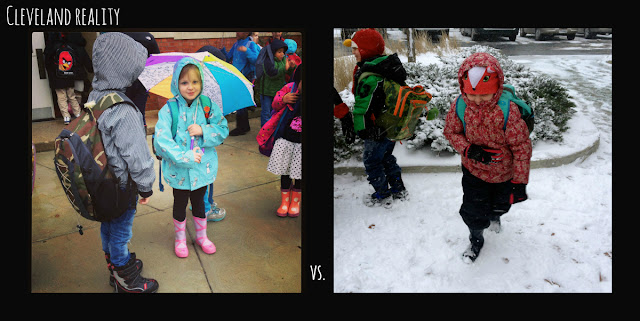 "Did I ever complain about the heat of St. Louis? If I did, I didn't mean it. I take it back. I take it all back!" - me. Most nights as I bundle myself, teeth chattering, wondering if I will die in my sleep due to equal parts hypothermia & misery.

This is what I get for ever muttering the words, "I won't miss the heat." What a lie. A crazy. Miserable. Lie. Oh to walk out of my door and be hit with temperatures over 100 degrees. The air so thick you feel like you are walking in an oven with your insides cooking to dangerous temperatures.

The only thing constant here in Cleveland is me being miserable and the worst weather. It's almost always grey. I've seen the sun a handful (literally) of times since we moved here 4 months ago. For awhile, it just rained. I don't count seeing the sun, when it's sunny AND raining or snowing. It's weird. It happens, and it doesn't count as seeing the sun. It rained, all.the.time. And here I thought Seattle was known for it's rain. Why Seattle? Why not Cleveland? Cause all it was doing was raining. I would say, "I can't handle another day of rain! Anything but rain!" And you know what? Be careful what you wish for.

Now, if it isn't raining? It's snowing.

Slight, detour: The kids have been waking up early. Like, it's still dark outside, early. I can't yell at JJ to go back to be bed with the result I want - I can give L the what for. One morning (true story), when L came in to wake me up - it was still dark. I shot her 'the look' and told her to go.back.to.bed.

That's how little we see the sun. It's all Alaska up in here.

As I was saying, it's so cold. I'm sure there are colder places, but colder than I can describe. The worst part is the inability to regulate the temperature in the house. We have a big ol' house, built in the 20s. Guess what they didn't use in the 20s? Insulation. Our master bedroom is 27x19. Pause to gasp. It's huge. There is a little offshoot within the room, that I have made my home office. Basically, my office is in my bedroom, but it's blocked off so it isn't that obvious. With a 27x19 room - we had the space. It's the coldest room in the house. By.Far. The next time it dips to hell freezing over temperatures,  as it did a week or so back, I'm bringing in the outdoor thermometer for some real numbers. I'm into numbers. While I can't tell you how cold it was inside the house. I can tell you (allegedly) it was 10 degrees outside, on a good day. And even though it was 10 degrees, the news would say "it feels like 1°." FEELS like 1°???? It felt like hell was freezing over. If I wasn't wearing my Northface long down parka, I was most certainly wearing a winter hat, gloves (without fingers so I could type), scarf & blanket. To add to that? I would light candles. Not to set the mood, but to omit heat. I look like a homeless person, without a shopping cart. Or so I was told.You be the judge. Look at the sadness in my eyes. 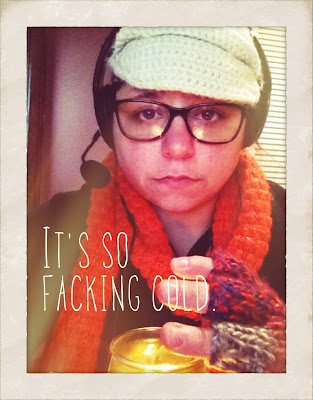 Sure, when we were in the STL I wasn't happy about it being so hot, you could break a sweat breathing. But did I look this sad? NO. Ah, to be unable to reach for the remote without losing my breathe due to heat overcoming our home. To shield our rooms of the massive sunlight we once knew. Those were the days...
circa 10:00 AM

Email ThisBlogThis!Share to TwitterShare to FacebookShare to Pinterest
find it: Cleveland ROCKS, L-ism