Everyone warned me. Everyone told me. The threes are the new twos. I've heard it all from the Terrible Threes, the FML Threes to the F*cked Up Threes and I'm not sure if I am coining this, but I'm going with the Terrorist Threes.


The day after her 3rd birthday threats & premonitions became a reality.  I immediately did what any mother in 2010 would do. I went straight to Facebook. I got such "encouraging" comments as:
I don't know why I was surprised but the day after her birthday I got hit with a ton of bricks. A ton of whiny, crying, grunting, pain in the ass bricks.  I have been reading all over the crazy wild world wide web about stories of the wretched three year old curse.  At one point I felt like L & I were doing a 'theatrical interpretations' of different blog posts, specifically over at Motherhood, WTF.  WTF, indeed people.  I'm going to have to go back and re-read with newly fresh and truly scared eyes.


Day one after her 3rd birthday she was in time out for 95% of the time she was awake.  I'm talking time out after time out. I'm talking a miserable dinner and miserable night. Ordinarily she gets to watch one episode of something.  That's the rule, though it should be the exception because if I'm being honest she usually watches at least two episodes of something (20-ish minutes a pop).  I know my super mom cape isn't going to be delivered any time soon, but with the ball & chain's travel schedule and my own work schedule - often times I have to put in an hour or two after she gets home from school.  Usually I can split that out a little bit for when she is awake verses after bed, which means some extra TV time for the kid.  I'm not proud of it, but we do what we can to survive here. That first day after she turned 3 I really felt what it was like to be a parent. I made a decision based on what was best for the kid verses what is best for me. Despite how easy it would have been to put her in front of the TV, I held strong.  Don't pretend you didn't see 95% of the time in time out.


She was home by 5 pm and I put her to bed by 7 pm in an effort to keep everyone safe and happy. This plan seemed like a great one at 8 pm.  At 5 am the next morning I realized my plan had failed me.  On day two, after she got home from school the mayhem started pretty much immediately.  I knew something had to be done.


L & I had a pretty serious conversation about the rules.  Moving forward, like last night, if she was wild and was in time out a lot this means no TV. This hurt her.  When she cries for no reason? No TV. When she doesn't listen, talks like a baby or grunts instead of using her words? No TV. And there I was having the conversation I've seen time and time again on TV sitcoms through out the ages.  "This hurts me more than it hurts you." Because truly? I'd really like to be the parent to just let her do what she wants so she shuts the hell up and I can get done what I want to and need to get done.  I won't do that (yet).


In addition to the rules, we now have a sticker chart - personalized just for her. 10 stickers and she gets a prize. Said prize may very well be a toy from the dollar store or a piece of freaking candy, we only have 5 stickers thus far, so I have a few more stickers to figure it out.  How it works is - if she has a 100% day in each category or rule she gets a sticker.  Her 6 major rules are as follows: 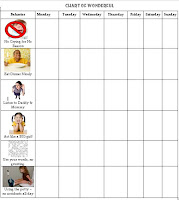 So far, so good - the stickers make my world go round.  Amen. Now to be fair, it's only been a few days but I am going to remain positive here.  I need it to work out.  Two days into pure and tiresome threes insists that I be hopeful.  The day the stickers stop working, send help.  I give up. I surrender. I know, only two days and I'm punking out? I'm weak. I own that. Until someone else has to come in and take over - it's me and you, Dora stickers.  Let's hope it lasts 4Eva.
circa 9:15 AM

Email ThisBlogThis!Share to TwitterShare to FacebookShare to Pinterest
find it: parenthood