The Binky Fairy Came and All She Left Me Was Debt

We decided the Binky Fairy would come on L's third birthday and take her binkies.  That's been the plan for at least a year, after we bagged the whole at two she would give them up. This year, we've talked about it daily, reminding her. In retrospect, it is kind of cold of us.


Happy Birthday Girl! NOW. A crazy lady is going to come to our house and take something you love dearly. Happy Birthday! Go to bed in a tantrum!
After school, we came home and ran around the house collecting all of her binkies... there were a LOT. We made an envelope together, she wrote her a note, we stuffed all her binkies in the envelope and put it in the mailbox. I don't know where I heard someone saying their kid was scared of some strange woman coming into his room, fair enough. I decided to bypass that all together. Plus I am not graceful so why even attempt to sneak in and get the envelope if I didn't need to. 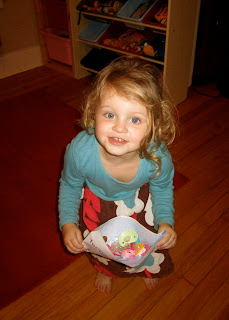 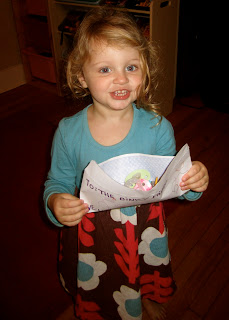 Friends told me the binky fairy left a 'big boy/girl' present and the kid was psyched.  Unfortunately I didn't think of that in time nor did I have time to make that happen. Plus, it's her birthday, and we are having a birthday party for her on Saturday so I just kind of figured more 'crap' could wait. Also, she won't know any different - she isn't on Facebook, she doesn't know what the 'other kids' got.  I decided we'd just celebrate on the porch when we discovered the fairy came. Friends said to leave 'fairy dust' which was another thing I forgot. Someone suggested to use baby powder - but since that kid knows her baby powder I decided to scrap the whole thing and pretend the gold sparkley paint on the inside of the mailbox would do.


Fast forward through a slight tantrum at night and sound sleep through out - she wakes up and is ready to go check out the mailbox to see if her binkies are gone. I lifted her up (my mailbox is high) and pointed out the sparkly fairy dust.  She was so excited. She was amazed to see the envelope was gone.  She literally had her jaw drop and whispered, "ooh mee gaaad."  She reached around the mailbox to confirm that the bulky envelope was in fact gone. 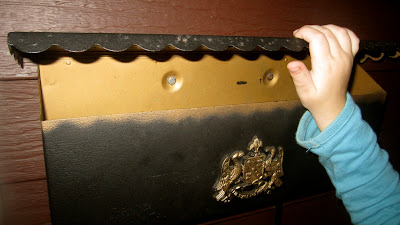 Much to my surprise she pulled something OUT of the mailbox. Apparently I forgot to take out all the mail yesterday and there was a lone Citibank statement in the mailbox.

She squealed "MAMA, LOOK!"  I put her down on the ground and quickly tried to come up with a story.  Before I could say anything (and this is NOT an exaggeration) she hugged the statement and said, "Mama. It's SOOO beautiful." 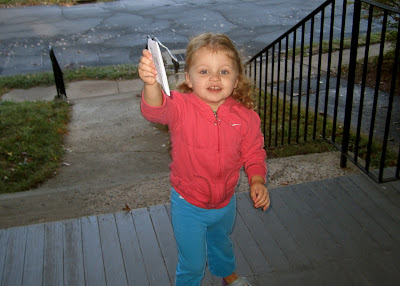 Ah the simple things. I quickly decided that the statement was in fact a letter from the Binky Fairy and since we were running late for school (which was another lie, because for the first time in forever we were going to be EARLY), we had to go now and couldn't read the letter. We'd read the letter after school! It turns out the letter will send L on a scavenger hunt for her big girl present since I am a sucker and she is too cute.
circa 2:01 PM

Email ThisBlogThis!Share to TwitterShare to FacebookShare to Pinterest
find it: milestone ticker tape, parenthood, what no one told me but I wish they would have